Arizona’s season opener against NAU at Arizona Stadium on Sept. 2 is 15 days away. To go along with the countdown to kickoff, this site will publish the Top 50 games in Wildcat football history.

WHY IT MADE THE LIST: If Arizona and the “Desert Swarm” defense wins this game — the Cats were ahead 20-0 at halftime against a Cal team on a four-game losing streak — the program smells roses for the first time.

The Rose Bowl drought for Arizona continued, however, as Cal scored 24 unanswered points in the second half, 17 of them in the fourth quarter, to pull off the upset. 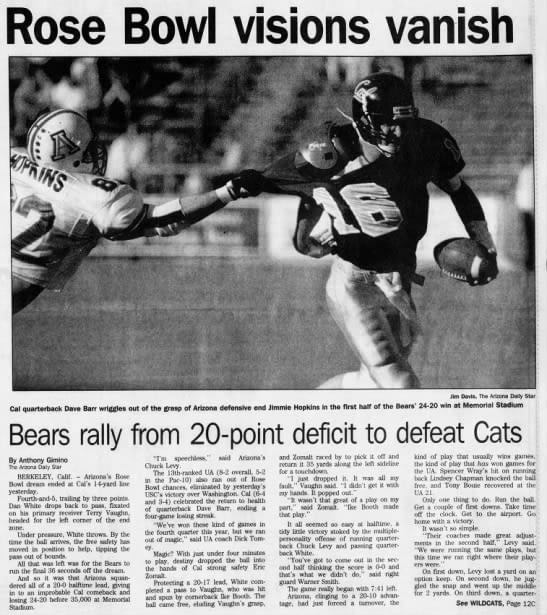 Cal safety Eric Zomalt returned an interception thrown by Arizona quarterback Dan White 35 yards for a score with 3:38 left and then broke up a last-second desperation pass from White to Terry Vaughn into the end zone as the Golden Bears, 6-3 overall, upset the Wildcats (8-2).

Included in that final drive, Vaughn was flagged for a questionable unsportsmanlike conduct penalty after he accidentally bumped into a referee after making a first-down reception at the Cal 19-yard line.

Before Cal’s 24-point outburst in the second half, the Golden Bears went eight quarters without scoring.

“I was at the Cal game as a fan. My dad and I made the road trip and the first half was great. Not only did the Wildcats take a 20-0 lead, but I impressed all of the fans around me by correctly predicting 85 percent of Arizona’s plays, including a trick play when Dan White went in motion and they snapped to Chuck Levy. Then the second half happened. Tomey went conservative, Cal got the infamous pick and then Arizona got the bizarre personal foul penalty on the late drive where Terry Vaughn made a big catch but the Cats got a personal foul during the post catch celebration.” “When you’re ahead most of the game, that’s the toughest one to lose,” White was quoted as saying in an Associated Press article. “A few mistakes here and there killed us.”

Lindsey Chapman’s one-yard touchdown run finished a seven-play, 58-yard drive that brought Cal to within 20-17 with 4:42 left. Arizona, which alternated White and Chuck Levy at quarterback, ran two plays and was facing second-and-8 from its 28 when White threw a pass that Zomalt turned into the deciding points.

The pass went to Vaughn, but the ball popped into the air after a hit by Ike Booth, and Zomalt caught the deflection in stride, running untouched down the left sideline for the score.

“I threw the ball and I thought he (Vaughn) caught it. Then I saw the guy running the other way,” White said in the AP article.

“They made the plays at the end. We didn’t,” Arizona Coach Dick Tomey told the AP. “They deserve credit for coming back from a sizable deficit.”

Arizona, with its “Desert Swarm” defense, kept Cal in check as it took a 20-0 lead by scoring three touchdowns in the final 7:53 of the first half, two after Cal turnovers. Golden Bears quarterback Dave Barr overcame nine sacks to throw for 263 yards in his first full game since suffering a shoulder bruise five weeks previously.

Tomey lamented a year later with Tucson Citizen columnist Corky Simpson about not sticking to the run late in the fourth quarter and allowing the “Desert Swarm” to win the game instead of passing and allowing Zomalt to put the Bears ahead with the interception.

“You don’t want to throw an interception deep in your own territory,” Tomey told Simpson. “If you’ve got a great defense, you want to kick it and play defense and try to win.”