Arizona’s season opener against NAU at Arizona Stadium on Sept. 2 is eight days away. To go along with the countdown to kickoff, this site will publish the Top 50 games in Wildcat football history.

WHY IT MADE THE LIST: Does any individual play in the annals of Arizona football match Ortege Jenkins’ phenomenal “Leap By The Lake” game-winning score against Washington between two top 20 teams in 1998?

Lee Pistor, Brett Weber, Max Zendejas, Gary Coston and Doug Pfaff all made pressure-filled field goals at crucial moments and their names are scattered throughout this Top 50 ranking. 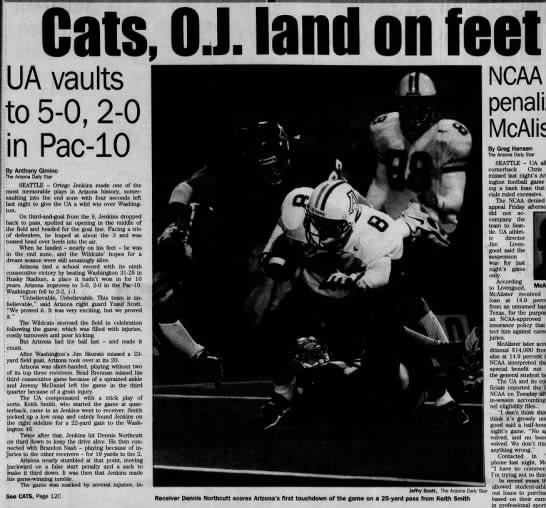 Chuck Cecil, Darryll Lewis, Chris McAlister, and Antoine Cason also made memorable interceptions, and Ricky Hunley and Byron Evans — just to name a few — had significant tackles in key stretches of a game.

The thing about field goal attempts, interceptions and tackles: They are common plays.

“I was not at this game, but I was watching it on TV at the home of Paul and Toni Schwalbach. Before the final play, I turned to Paul and said: ‘You know what Dick Tomey says at this time? ‘Some Wildcat has to make a play.” The Associated Press did not have a good photo of the leap on the Sunday after the game, but Mike Chesnick and I were able to track down a photographer who did, and we were able to use that photo (for the Tucson Citizen). Ortege Jenkins’ play, to me, is the single greatest individual play in college football. I know folks will mention the lateral play of California beating Stanford, but what else could those players do. That was the only option. Doug Flutie’s Hail Mary pass to beat Miami? What else could he do? He threw the ball to the end zone. It was his only option. Jenkins had to consider throwing the ball or running. Then he gets hit and has the presence of mind to roll forward and not fight the flip.”

Nothing is common about a player catapulting into the end zone. When did you see that before Jenkins’ play in college football, and when have you seen it happen since, especially with the game on the line? Myself, never.

The Cincinnati Bengals’ Jerome Simpson somersaulted over an Arizona Cardinals defender into the end zone in 2011, but that was in the second quarter with Cincinnati leading 10-0. No pressure there. Simpson gets more style points than Jenkins, because he landed on his feet, but Jenkins’ body flipped because of contact with Washington defenders.

TCU’s Trevone Boykin in 2014 had a similar flip in the end zone against Kansas State but that happened in the second quarter with the Horned Frogs up 17-7. The game was not on the line at that point.

Former Arizona coach Dick Tomey said during a podcast in 2012 that Jenkins was one of only a few athletes in college football that can make such a play. It is difficult to argue that statement given Jenkins’ athleticism with his basketball background.

Tomey said in the podcast, which was titled “Bear Down Bias” and is no longer on the Web: “We told (Jenkins) that, ‘This fourth down, you gotta score … if you have to run, you gotta make it. We have no chance to get the clock stopped.”

“He was well aware of the circumstances,” Tomey continued. “The play he made was just a natural, athletic play. He was one of a few guys in college football that year that could make that play.”

The importance of the play was magnified by Arizona’s 12-1 record in 1998, although the Wildcats lost their only game that season the week afterward at home against conference champion UCLA.

My colleague Anthony Gimino, who was at Husky Stadium covering the game for The Arizona Daily Star, recaptured the excitement of the moment in his blog at the now defunct TucsonCitizen.com. The Pac-12 Network was about to air a replay of the Arizona-Washington game as one of its classics. He reprinted an article he wrote about the “Leap by the Lake” in 2008 for the Tucson Citizen print edition.

Here is an abbreviated version of what Gimino wrote in 2008. I recommend that you read it in full by clicking on the link in the previous paragraph. Be ready to feel some goosebumps:

Arizona was at the Washington 9-yard line. Dennis Northcutt and tight end Mike Lucky were split to the left. Malosi Leonard and Brandon Nash were to the right. Washington had 3-on-2 coverage on both sides.

Jenkins took the snap, looking left for Northcutt, his top receiver. Double-covered. He looked right into the end zone. Nothing. Jenkins continued to drift back.

Running back Trung Canidate swung out to the right, taking a defender with him. Also covered. Jenkins, still backpedaling, was in trouble, retreating all the way to the 20-yard line.

His only choice seemed to be an incompletion to stop the clock.

Well, there was one other option.

All the defensive pass coverage was deep or to the outside. The middle was invitingly clear. Jenkins could run. Do or die. Score or lose. Hero or goat.

With Tomey’s words still echoing – “If you run, you better make it” – Jenkins planted his right foot and charged into history.

Jenkins started to run and the coaches in the press box jumped out of their chairs.

There’s sometimes a fine line between bravery and foolishness, but Jenkins, who never lacked for confidence, had made his decision, seeking out pay dirt in the purple end zone of Husky Stadium.

As Jenkins reached the 10, Washington defenders Brendan Jones and Marques Hairston came up from the end zone. Linebacker Lester Towns moved in from Jenkins’ right.

Nash watched helplessly from the end zone; there was no one he could block.

Jenkins knew he couldn’t make it if he tried to dive low. He knew he wasn’t going to run over a big guy like Towns. Only one way to go.

At about the 3-yard-line, Jenkins left his feet.

Jenkins could see the goalpost … and then suddenly he couldn’t. All three Washington defenders hit him low, flipping him heels over head.

“I remember seeing the black sky, the stars in the sky,” Jenkins said.

And then he saw the goalpost again.

Jenkins landed on his feet in the end zone, tumbled to the ground and popped right back up, having somehow held on to the ball throughout the flip.

“Once I realized where I was, I knew the game was over,” Jenkins said.

Arizona made the extra point and then needed only to kick off to end the game, winning 31-28. The Leap at the Lake turned out to be the greatest play of Jenkins’ career.