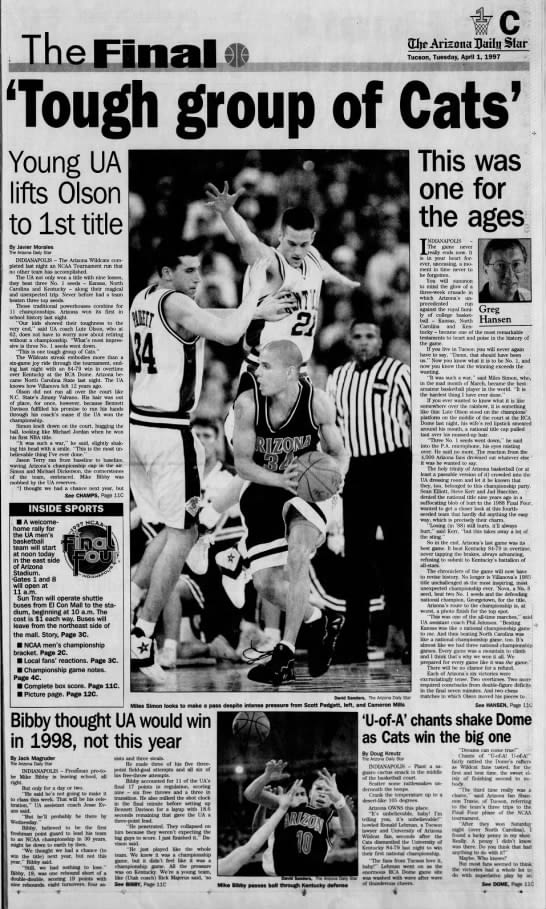 The Arizona Wildcats completed tonight an NCAA tournament run that no other team has accomplished.

The UA not only won a title with nine losses, they beat three No. 1 seeds — Kansas, North Carolina and Kentucky — along their magical and unexpected trip. Never before had a team beaten three top seeds.

“Our kids showed their toughness to the very end,” said UA coach Lute Olson, who at 62, does not have to worry now about retiring without a championship. “What’s most impressive is three No. 1 seeds went down.

“This is one tough group of Cats.”

The Wildcats’ streak embodies more than a six-game joy ride through the tournament, ending tonight with an 84-79 win in overtime over Kentucky at the RCA Dome. Arizona became North Carolina State last night. The UA knows how Villanova felt 12 years ago.

Olson did not run all over the court like N.C. State’s Jimmy Valvano. His hair was out of place, for once, however, because Bennett Davison fulfilled his promise to run his hands through his coach’s mane if the UA won the championship.

Simon knelt down on the court, hugging the ball, looking like Michael Jordan when he won his first NBA title.

“It was such a war,” he said, slightly shaking his head with a smile. “This is the most unbelievable thing I’ve ever done.”

Jason Terry ran from baseline to baseline, waving Arizona’s championship cap in the air. Simon and Michael Dickerson, the cornerstones of the team, embraced. Mike Bibby was mobbed by the UA reserves.

“I thought we had a chance next year, but not this year,” said Bibby, who had 19 points and nine rebounds. “Still, we had nothing to lose.”

Walk-on Jason Stewart lay on his back at midcourt, eyes closed, praying with a throng of photographers around him. UA assistant coach Phil Johnson stood alone, letting it all sink in.

“This will go down as one of those special championship teams in college basketball history,” Johnson said. “We beat three great programs along the way. This is something they’ll talk about years from now.”

With each possession and field goal attempt in the last 11 minutes of regulation, the tension grew. In that span, there were 11 lead changes and six ties. Neither team took a lead of more than three points.

Scott Padgett, not All-American forward Ron Mercer, was the catalyst for Kentucky. Padgett became hot from the outside, scoring 14 of his team’s 18 points in one stretch.

After Padgett’s two free throws with 2:09 left in regulation put Kentucky ahead 68-67, the UA scored five straight points. In the process, Jared Prickett became the first of five Kentucky players to foul out when he intentionally wrestled down Simon on the break with 1:27 left.

“It was one of those games where no lead was safe,” Padgett said. “Neither team was going to give in.”

With the UA ahead 72-68, Mercer nailed a 3-pointer to cut into the lead with 51.1 seconds left. Arizona responded with a pass off penetration from Bibby to Davison, putting the UA up 74-71 with 18.7 seconds remaining.

Undaunted, Anthony Epps hit a 3-pointer with 12.1 seconds remaining to tie the game at 74. Simon tried to drive against three defenders on the other end, but the ball was slapped loose.

Padgett grabbed the ball, and his pass was intercepted by Terry, whose last-second heave did not fall. Five more minutes of overtime separated the UA from a national championship.

“Coach Olson gave us that same speech, ‘Whose going to be the stronger team? Who’s the toughest out there?'” Terry said.

The Wildcats already showed they were tough enough to handle Kentucky’s press. That was a non-factor in the game because the UA only had three turnovers off of that pressure.

Slowly, Kentucky started to melt way. Mercer would foul out and then Padgett.

Epps cut the UA’s lead to 79-76 with 1:46 remaining in overtime, but Simon closed out the game making four straight free throws. The Final Four MVP was 14 of 17 from the line and finished with 30 points.

Arizona was 34 of 41 from the line and scored all 11 of its points in overtime from there.

“Simon going to the line 17 times tells you something,” Kentucky coach Rick Pitino said. “It shows he was relentless. He took it to us. I really like their team.

“I like any team that can pass, catch and shoot. Their team is something to watch. I’m very proud of our team, and I’m very happy for Lute Olson and the Arizona Wildcats.”