We have reached 27 days until the Arizona Wildcats kick off their 2018 campaign under new coach Kevin Sumlin. The season begins when Arizona hosts BYU on Sept. 1 at Arizona Stadium. 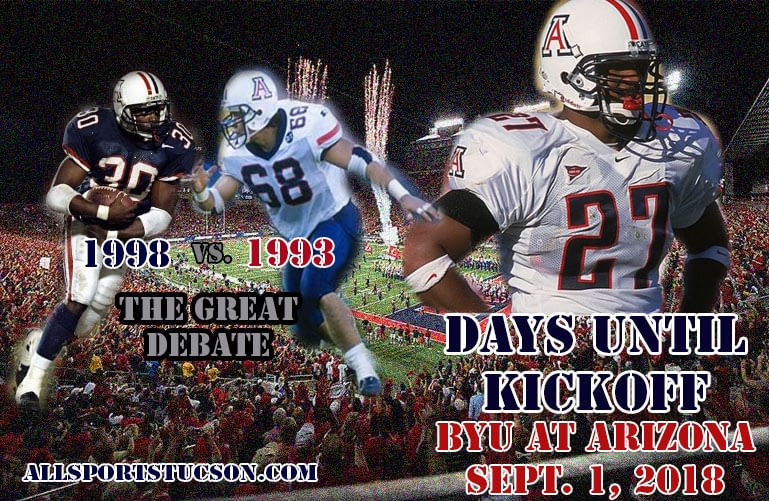 We started the debate when it was 50 days to kickoff. All of the reader polls can be accessed here (you still have time to vote):

Things looked bleak for the 1993 team after two incomplete passes made it third-and-10 from its own 27-yard line with 2:38 remaining in the game, down 20-19 to the 1998 team. The 1993 team, executing behind quarterback Dan White, was in a four-down situation. No way it would punt this late in the situation. It faced that challenge right away, fourth-and-4 at the 33 after a short pass to running back Billy Johnson. Rich Ellerson, the architect of the Desert Swarm defense serving as the 1993 head coach, called timeout with 2:27 left.

White broke the huddle and attempted to execute the play call — a quick pass out to Terry Vaughn in isolation, hoping his speed could take over against Kelvin Hunter, who was just as athletic. Vaughn caught the pass and managed to twist forward for five yards to keep the possession alive. White spiked the ball to stop the clock with 2:09 left with possession at the 38.

Ellerson figured his team had to get to at least the 1998’s 38-yard line to set up a 55-yard field goal for Steve McLaughlin, who certainly could make it from that far. Only 24 yards separated them from that goal.

With two timeouts remaining, Ellerson could risk a draw play, handing off to Ontiwaun Carter on first down. The tough-as-nails small back who was difficult to see running behind the line managed to break a run for eight yards to his own 46-yard line. It was now third-and-2 with the clock at 1:50 left, following another timeout, when White got behind center in the hurry-up offense.

White faked a handoff to Chuck Levy and completed a quick pass to Richard Dice near the sideline for a 7-yard gain. Dice ran out at the 1998’s 47-yard line with 1:42 left. The 1993 team needed only about nine more yards to reach McLaughlin’s range.

That became 15 yards after White was sacked on first down by linebacker DaShon Polk on a blitz, pushing the ball back to the 1993’s 47-yard line. Ellerson saved his last timeout so the clock kept on running. White got some of the yards back on an 8-yard pass to Troy Dickey, who somehow snared the pass near the sideline over Chris McAlister. It was now third-and-8 at the 1998’s 45-yard line with 1:15 left.

White’s next pass to Vaughn on a slant pattern was nearly intercepted by Hunter, who made an incredible play leaping to get a hand on the ball. The clock was down to 1:07 left with the 1993 facing a fourth-and-8 situation.

The 1998 team blitzed on the next play, coming at White aggressively. The unshakable quarterback, who never lost to ASU in his career, picked up the blitz, stepped to his right and connected with tight end Rod Lewis over the middle. Lewis caught the ball just past the yards needed for the first down and rambled to the 1998’s 33-yard line with 55 seconds left and counting.

Now within McLaughlin’s range, the 1993 took its time coming out of huddle. White told his guys, “We got this. They can’t take it from us!” Johnson ran toward the middle (setting up a straight-away attempt by McLaughlin) for two yards to the 31-yard line. Ellerson let the clock click until only 3 seconds remained before calling a timeout.

It all came down to this, 1993 vs. 1998, two of the greatest (if not the greatest) teams in Arizona history battling it out for almost 16 minutes, nearly deadlocked with the 1998 team leading 20-19 with only three seconds left.

McLauglin ran on to the field with holder Heath Bray. who offered encouragement to McLaughlin by patting him on the shoulder pads. The crowd was in a frenzy during the timeout but became eerily silent as McLaughlin lined up for the 48-yard try for the win. A whistle blew. Timeout, 1998 team. Dino Babers, the head coach tried to ice McLaughlin by calling a timeout just before the snap. The crowd became loud again until the referee lowered his arm signaling the play clock to start.

McLaughlin looked at the uprights and then stared at where Bray would hold the ball.

“Whoa Nellie! Here it is, for bragging rights from here to Casa Grande and Nogales and all points between,” Keith Jackson said. “The snap, the hold, the kick ….”

“Dad … dad! Wake up! You’re going to be late for work!” my daughter yelled to me.

I tried to fall quickly back to sleep to see if my dream could continue. Did McLaughlin make it??

I could not bring back the dream, at least at that moment.

The 1993 team facing the 1998 team to determine the best in Arizona history would have to remain a vision, an everlasting one, without a clear-cut outcome. The argument would have to live on.

— The best Wildcat to wear No. 27 was linebacker Lance Briggs, who was a standout for Arizona during its lean years of 1999 to 2002. He could have starred for any of Arizona’s greatest teams. He was a three-team All-Pac-10 selection who went on to play in seven Pro Bowls while with the Chicago Bears. Briggs finished his UA career with 308 tackles, 10.5 sacks, 36 tackles for losses, three interceptions, 10 passes deflected, five forced fumbles and four fumble recoveries in 33 games at strong side linebacker.

Fourth-year junior cornerback Sammy Morrison wears No. 27 proudly just like his dad Darryl Morrison, a standout when the Desert Swarm developed in 1992. Sammy has played in 20 games in his career and made two starts as a true freshman in 2016. He has registered seven tackles.