Shedding some light on just how much a big-play threat quarterback Salpointe sophomore Treyson Bourguet has become in his brief stint this season for the Lancers:

The top quarterback in the state — Gilbert High School 6-foot-2, 205-pound senior Will Plummer — is bound for Arizona after throwing for 3,584 yards this season. He reached that many yards completing 268 passes in 438 attempts, an average of 13.4 yards per completion. Plummer finished with 33 touchdowns and 18 interceptions.

Bourguet (6-2, 190) has thrown only 41 times in his six games after becoming eligible midway through the season following his transfer from Marana. He has 28 completions for 573 yards, an average of 20.5 yards.

Albeit a small sample size, Bourguet’s average is 7 more yards per completion than the best this state has to offer in the Class of 2020. Bourguet has 12 touchdown passes, so he’s averaging a scoring strike every 2.3 completions. Plummer’s averaged a touchdown pass every 8.1 completions. The stats show what lies ahead for the youngster who conducts himself on and off the field beyond his age.

“I just really love his demeanor. Very coachable. Great teammate. Likes the chess game, so to speak, that is the quarterback position. He’s really engaged mentally and that’s always a good quality when your quarterback is really bright and challenges you as a coach as well,” said Salpointe coach Dennis Bene, who knows quarterbacks.

Bene broke Rodney Peete’s state record at the time when he passed for 425 yards with Salpointe in a 31-31 tie against Sahuaro. A senior that season in 1983, Bene was lauded by then-Salpointe coach Steve Sorce with similar qualities that Bene said about Bourguet this week.

“Not only does he have a great arm, but he’s heady, very intelligent,” Sorce told former Arizona Daily Star prep editor Danny White after Bene’s record-breaking performance against Sahuaro. “He’s the kind of kid you can make up a play in the huddle and he will execute it.”

Saturday’s Open Division semifinal game between No. 4 Salpointe (10-0) and No. 1 Chandler (11-0) could be the last of Bene’s 19 years as head coach at his alma mater. Resigning at season’s end, Bene is hopeful he can coach two more games with his players.

Bourguet has two more seasons with the Lancers. His time is really just beginning after playing behind his brother Trenton last year at Marana and having to sit half of this season per AIA transfer rules. 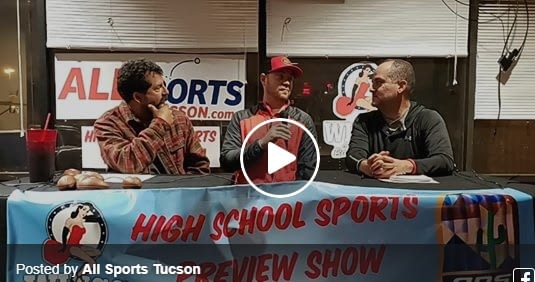 VIDEO: Tucson High’s Justin Argraves Provides Insight on Salpointe-Chandler Matchup After Coaching Against Each This Season

Share Tweet Tucson High’s Justin Argraves, the only coach who faced both Salpointe and Chandler this season, mentioned last night that the matchup tomorrow night between the Lancers and Wolves fulfills the expectations of the newly-created Open Division playoffs. “I like it. It’s fun. It’s entertain…

Going against a Chandler defense that has four Division I recruits among its senior class, Bourguet is about to experience the toughest test of his young career. He is not flinching.

“I really matured those five games I had to sit out,” Treyson said. “I realized I am not working for those games that I missed. I am working for these three games (in the Open Division playoffs) and leaving all that in the past.”

Blessed To Receive My First D1 Offer From The University Of Arizona 🐻⬇️ @NzoneFootball pic.twitter.com/BJAeXGb3Ew

In his first playoff start last week in the 48-10 win over Phoenix Pinnacle, a Class 6A program that has 28 wins over the last three years, Treyson completed 10 of 14 pass attempts for 243 yards with four touchdowns and one interception. Exhibiting his ability to see the field, he completed passes to six different receivers.

“It’s been a long time since I’ve seen a quarterback that has the football awareness and smarts just from the one game I saw (Bourguet) play (last week against Pinnacle),” said Tucson High coach Justin Argraves, who coached against Chandler and Salpointe this season. “He makes things happen with this football vision, and the kid has a cannon of an arm, smart football player. That’s a great deal breaker going into the game on Saturday night for them.”

One of the receivers who caught one of his passes was his brother Coben Bourquet, a senior who splits time as a safety on defense. Coben,who also transferred from Marana and missed the first five games, caught a 22-yard throw from Treyson.

His average yards per completion in his brief career: 21.8 yards.

He has 18 touchdown passes in his 47 career completions, an average of once every 2.6 completions.

And this is over parts of two seasons in which he was not the starting quarterback to begin the season.

Imagine the potential his junior and senior seasons.

“You know, Coben and Treyson have really followed their brother’s footsteps and Trenton (now at ASU as a preferred walk-on) is an amazing, amazing athlete in his own right,” Toby Bourquet, the father, said. “God didn’t bless Trenton with the couple inches and 20 pounds that he blessed Treyson with and that’s really what is separating them. Treyson has always been a bigger kid with just really tons of athleticism and and he backs that with some intensity and a work ethic that is very rare.

“He tries to follow his brothers being a leader and just winning. That’s kind of the bottom line is these guys they know how to win. They don’t blink in the face of adversity. I can’t count on both hands the times that these boys have thrown touchdown passes on the last play of the game in the biggest game that they played in numerous times. They’re ready for this moment.”

The stories of the athletic and academically-inclined children of Toby and Vanessa extends to their daughter Rylen, who is a freshman soccer player at Salpointe playing for the varsity team.

“Growing up, I always watched my dad play flag football at Sports Park,” Treyson said. “I watched my dad and my uncle play. And then when my brother (Trenton) was old enough to play, I watched him. It just really helped me develop. It motivated me and gave me a different view of the game.”

Treyson is well-traveled, not only with Tucson Turf winning those national titles in Florida, but also his early recruiting visit circuit. He has made unofficial visits to Arizona, ASU, UCLA, Notre Dame and Texas.

He and his family post the memorable experiences on social media, but true to his maturity level, he does not allow the success or visibility go to his head.

“It’s awesome and crazy that a Tucson kid can go across the country and have a good time at those schools,” Treyson said. “Being around players like Bijan (Robinson) and Latham (Ransom), they stay humble and they’re a big influence on me. I make sure to keep my head level.”