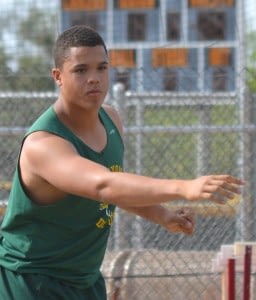 Canyon del Oro thrower Turner Washington committed to compete for the University of Arizona on Wednesday after a heated recruiting battle between the Wildcats and Alabama. In the end, family won out for the nationally-ranked discus thrower.

“The amount of excitement I’m feeling right now is indescribable,” Washington told me. “I was torn between the University of Alabama and the U of A. Faced with this tough decision I turned towards my family asking them for their insight.”

Washington’s uncle, Warner Smith, was a former All-Pac 10 lineman at Arizona. Smith became a valuable resource for the elite athlete. Smith asked Washington, “Where would you want to be if you got injured and could not compete, or if the entire coaching staff left.”

“The response was a no-brainer,” Washington added.

Washington set a state-record in the discus last spring at 202 feet. The distance actually stood as the national mark until another thrower from Texas broke the mark the next day. Washington’s mark is the fourth best in the nation heading into the track season this spring, not bad considering he started out at only 143 feet as a freshman.

Washington was also projected to be a top lineman in football but chose to concentrate on throwing which helped account for his meteoric rise in the sport.

“I couldn’t be more proud!” Smith told me after the announcement. “I was really worried that he was going to Alabama. He really liked their throws coach, Doug Reynolds.”

Reynolds, Smith explained, played football and competed in track and field at Arizona.

“With him staying here, all of his family and friends will be able to follow his career and share the experience,” Smith added.

Washington concurred with that assessment, “One of my favorite parts of throwing is sharing my success with my family, and if I went to Tuscaloosa that wouldn’t be possible.”