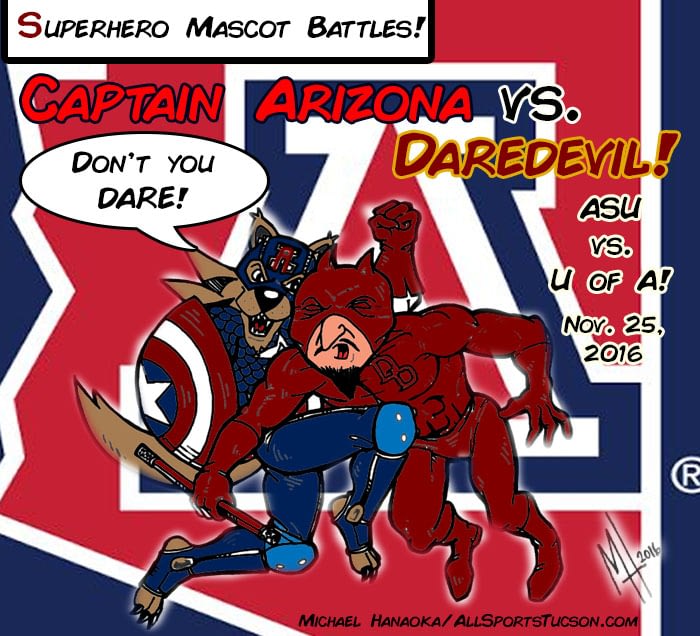 — Chuck Cecil’s 100-yard interception return for a touchdown in 1986 (the loudest I have ever heard Arizona Stadium and I’ve attended countless games there).

— The late nose tackle Joe Drake having a safety and later clearing a path for the second safety in the 1982 win that started “The Streak”. Drake tackled ASU running back Darryl Clack on the first safety and Arizona linebacker Glenn Perkins was credited for the second safety but Drake’s massive body (6’3″ and 300 pounds) shifted the center away from the middle, opening a clear path for Perkins to tackle Dwaine “Tex” Wright in his tracks.

The safeties are at the 35-second and 1:30 marks of the following video:

From former Arizona defensive back/quarterback Heath Bray about the 1989 game won by Arizona in Tempe when ASU showed up decked in all yellow banana-like uniforms:

“Coach (Dick) Tomey goes through the prep script and nothing different than any other game. As we are about to leave, he stops and says, ‘Hold on, I have something to show you.’ Then we all sit back down and the lights go out. On the big screen comes an interview with their center that he did the night before. He invites us to play smash mouth football, and calls out a couple of guys, Chris and Kevin Singleton, and Zeno Alexander, and then at the end, says something to the effect of ‘Bring it On’ to the camera. Well, needless to say, the quite tense meeting went crazy. Everyone was on their feet screaming and jumping and Coach Tomey just yells out ‘Lets go!’, and the rest is ‘Screaming Banana’ history. God it’s easy to hate the Mustard and Rust.”

From former Arizona offensive lineman Warner Smith about the Wildcats’ triumph in 1993 at Sun Devil Stadium, improving their record to 9-2.

“We were at our absolute low point. We had just blown our shot at the Rose Bowl against Cal and we were decimated by injuries. If ASU won, I think they were supposed to go to the Sun Bowl. If we won, the rumor was that we’d get another crack at Miami in the Fiesta Bowl. Chuck Cecil spoke to the team the night before the game at our hotel in Tempe. He was INTENSE!! ‘Reach down the devil’s throat, grab his little tiny heart, and CRUSH him!!’ It felt like Braveheart!! We could’ve played the game in the hotel parking lot. No one slept that night. The game was a three-hour brawl. Desert Swarm thumped Jake Plummer. Dan White sliced through the scummies like a surgeon. Afterwards, sure enough, Fiesta Bowl representatives were in our locker room to tell us we were going to face the Miami Hurricanes on New Year’s Day.”

MUST WIN FOR ARIZONA

In their 38-year history in the conference, the Arizona Wildcats (2-9 overall, 0-8 Pac-12) have never had a goose egg for wins. Their worst conference records were the 1-7 seasons under John Mackovic in 2003 and interim coach Mike Hankwitz (Mackovic’s midseason replacement after he was fired) in 2004. Arizona is a 3-point underdog against ASU, which is 5-6 and 2-6.

Arizona is one of five FBS teams without a conference win. The others are Tulane in the American Athletic Conference, Rutgers in the Big Ten, Fresno State in the Mountain West and Texas State in the Sun Belt.

Not only will Arizona possibly try to avoid going winless in the Pac-12 when it plays ASU, it will guard against losing another game to its arch-rivals under Rodriguez. Todd Graham and the Sun Devils are 3-1 against the Wildcats since Rodriguez’s hire in 2012.

Never has an Arizona coach gone 1-4 or worse in at least a five-game stretch against ASU.

The worst stretches against the Sun Devils for Arizona coaches in a four-year span or more:

LEAVING THIS ON A HIGH NOTE …

Is there crying in the ASU-Arizona rivalry?

You bet there is …

“My greatest memory: Coach Smith crying after the ’82 game,” former receiver Jay Dobyns said. “That game was so important to him and his passion for it was contagious.”

Somebody needs to get Larry Smith’s message to this year’s team before tonight’s game. It’s worth another read:

“Leave nothing to be questioned but much to be remembered.”