Without freshman guard Kobi Simmons, the Arizona Wildcats’ perimeter game would be in a much more difficult spot than it is now without Allonzo Trier.

The Arizona Wildcats’ guard play overall has been inconsistent and a noticeable flaw in their execution. Simmons has shown the most flashes of excellence out of the group. With his athleticism and moxie, he should continue to be a spark even if or when Trier returns.

Arizona's Kobi Simmons quietly having a strong freshman season. Has scored in double-figures in four of five games. 12.4 PPG, 43.8% from 3.

Power forward/wing player Lauri Markkanen is by far the most productive but Simmons has proven to be the glue guy who is making the Wildcats more formidable inside and out.

Against Santa Clara last week in the Continental Tire Las Vegas Invitational, Simmons made all three of his three-pointers and against Butler he fueled a second half rally with spirited play and a relentless style all over the court including this highlight alley oop play: 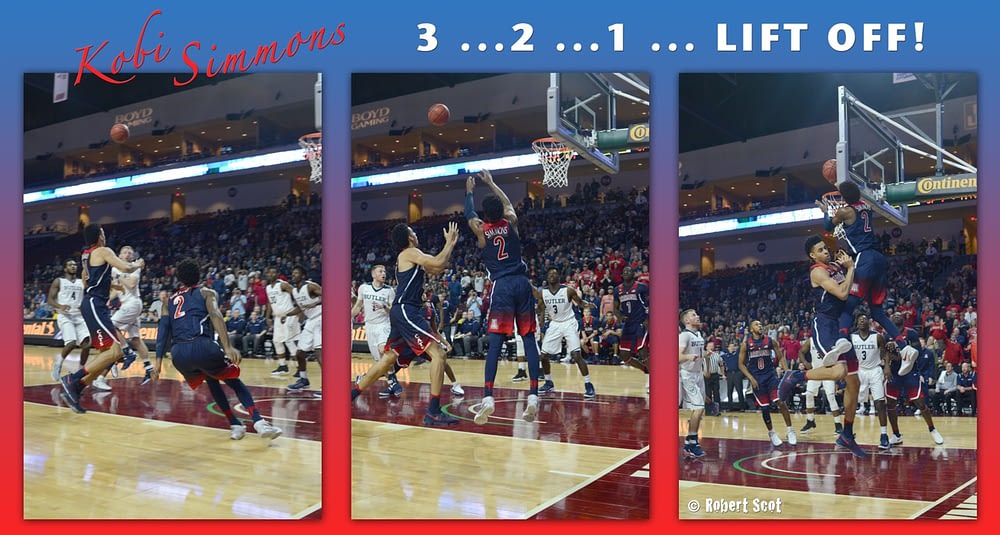 Kobi Simmons goes up, up and away, hitting his head on the backboard on an alley-oop feed from Parker Jackson-Cartwright (Robert Scot/VirlVideo)

Out of Arizona’s guard trio of Simmons, Parker Jackson-Cartwright and Kadeem Allen, and wing player Rawle Alkins, Simmons has shown through the first six games to be the most productive (getting the most out of his minutes) from the perimeter with a rating of .515.

All are below Arizona’s average of .538.

Kobi Simmons, along with Malik Monk, has one of the quickest first steps from triple threat in the country. Game changing burst.

What it means: Arizona is not getting the consistency it needs from the guard spot, although Miller can rely on each at certain times of the game. Some of it likely has to do with Arizona being without a scorer on the perimeter like Trier who can free up defenses for others to penetrate and become more active and involved.

Until Trier joins the team — if he does — Miller will continue to try to get the most out of the eight-man rotation with a more effective inside-outside game, especially against the dreaded zone.

The calendar has not yet hit December.

As Miller says, this team is a work in progress and that work likely will extend into January after the Wildcats start their Pac-12 season with or without Trier. February and March should be a different story.

Kobi Simmons won't be intimidated by those Pac-12 road trips in February and March. Tough as nails.