Arizona coach Sean Miller isn’t a psychologist but he plays one on the basketball court. This week, in easily the toughest weekend of the season to date and perhaps for the season as a whole, UA faces USC then UCLA on the road. First up: USC on Thursday at the Galen Center.

All Miller has to tell his Wildcats is: you/we are 2-4 vs. the Trojans and UCLA on the road since he’s been here.

“We haven’t had any more success at USC than we have at Pauley Pavilion,” Miller said at his weekly press conference. “If you add them up this has been the most difficult trip for us. I’m not saying that because we’re going to LA, but both teams are good.” 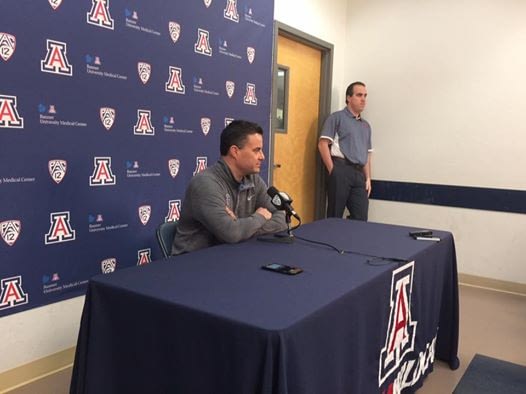 Historically, the years before Miller arrived at UA, Arizona was able to handle USC consistently well (not all the time but many) and struggle against UCLA (given its talent was very good). In fact, the concern was usually the Trojans being the “trap game” where UA wouldn’t get up for the game because a bigger, more high-profile game loomed with the Bruins. Sometimes it bit Arizona or caught it looking ahead.

Sometimes, Arizona was able to prevail, too. The one thing Miller doesn’t have to worry about on Thursday is this being a “trap game” in part because USC is pretty good. USC is 16-3 overall and 3-3 in the Pac-12. Never mind the 3-3.

“USC is a good team,” Miller said. “We look at both teams being important.”

So, 2-4 will be emphasized a lot this week. Last week, in a postgame press conference, a player referenced it.

“College players know when other college players are good,” Miller said. “They know who is on USC’s roster and our players respect that. And they should.”