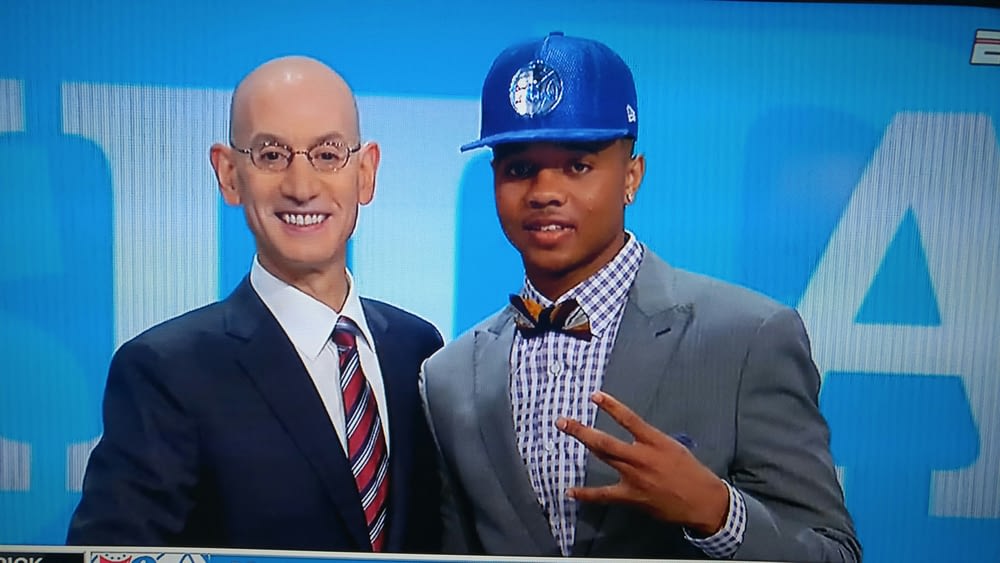 Markelle Fultz is the ninth No. 1 pick to play in McKale before becoming a pro. (ESPN screenshot)

The Philadelphia 76ers selected Markelle Fultz the No. 1 pick in the 2017 NBA Draft, making the former Washington Huskies guard the ninth top pick to have played at McKale Center.

Four of those No. 1 selections competed against Arizona, another four appeared in Tucson during the NCAA Tournament, and another was here for a high-profile exhibition game.

Here is the who, what and when:

Fultz struggled, relatively speaking, against Arizona in a 77-66 loss on Jan. 29, shooting 8 of 23 from the field, including 0 of 4 from 3-point range. He also missed all four of his free throw attempts. Fultz finished with 16 points, nine rebounds and three assists.

“He got a couple of calls go his way,” Fultz said of Allen.

Take a look at the head-to-head matchup between Fultz and Allen, who went No. 53 in the draft to the Boston Celtics.

The Utes used a 2-3 zone and a box-and-one against Arizona sharpshooter Salim Stoudamire, who took only one shot and was held scoreless.

“Arizona is just a bunch of athletes and they don’t really run good sets,” Bogut said in an AP story. “We were able to break those sets pretty easily.”

Bogut would return to McKale a few months later as sixth-seeded Utah beat UTEP and No. 3 Oklahoma in the first and second rounds of the NCAA Tournament.

The Wake Forest legend played his final two college games at McKale in the 1997 NCAA tournament.

The third-seeded Demon Deacons played St. Mary’s in the first round, with the skillful Duncan matched against St. Mary’s Brad “Big Continent” Millard, a 7-foot-3, 345-pound center. Millard dunked on Duncan and blocked his shot, but Duncan ruled the day with 22 points and 22 rebounds — his fourth career 20-20 — in Wake’s 68-46 victory.

Two days later, with actor Kevin Costner in attendance at McKale, Duncan’s college career was over.

Sixth-seeded Stanford pulled off a 72-66 upset. Duncan has 14 points and 15 rebounds in the first half, but was held in check after that, finishing with 18 points and 20 boards.

Duncan had returned to Wake for his senior season with hopes of winning the national championship.

“I have no regrets about anything regarding my decision,” he said after the game.

The sophomore edition of Michigan’s Fab Five — Webber, Jalen Rose, Juwan Howard, Jimmy King and Ray Jackson — landed as the No. 1 seed in the West in 1993. The Wolverines coasted past 16th-seeded Coastal Carolina in the first round at McKale before playing an epic game against the ninth-seeded UCLA Bruins of coach Jim Harrick.

The game went into overtime and was still tied with 9.6 seconds left in the game, seven seconds on the shot clock. Rose’s runner went off the backboard and rim; King rebounded and put in the game-winner with 1.5 seconds left.

There was massive confusion as officials seemed to debate whether either shot beat their respective buzzers, or if Rose’s shot had hit the rim. It really wasn’t close, but there was such uncertainty that the NCAA dispatched a pool reporter to the officials’ locker room for postgame comment (that reporter was me, by the way).

Webber had 27 points and 14 rebounds in that game, and the Wolverines advanced all the way to the title game against North Carolina, where Webber infamously earned a technical foul late in the game for calling a timeout when Michigan didn’t have any. The Tar Heels won 77-71.

Arizona played a home-and-home series with LSU in the 1990-91 and 1991-92 seasons, with O’Neal kicking some tail and swinging on the rim in the first meeting with 29 points, 14 rebounds and six blocked shots as the Tigers beat the second-ranked Cats.

The Wildcats’ big men, still stinging from the previous meeting, combined to hold O’Neal to 10 points and four rebounds before fouling out, with Arizona post player Sean Rooks waving him goodbye. Rooks

Earlier in the game, Rooks could only laugh as O’Neal delivered him a classic line trash-talking line: “I don’t care how good you play,” O’Neal said, “I’m still a No. 1 draft pick.”

“I’m not going to be a Shaq Snack and be put in Sports Illustrated and look like an idiot,” he said after the game. “He’s a good player, but I think I’m a pretty good player, too.”

Shaq would later return to McKale late in his NBA career with the Phoenix Suns, who held a preseason scrimmage in Tucson in 2008.

No. 1 UNLV, going for back-to-back national championships, began the 1991 postseason with a 41-game winning streak and cruised past Montana 99-65 in the first round at McKale. Johnson scored 23 in the game.

Jerry Tarkanian’s Rebels faced a formidable challenge in the second round against a talented Georgetown team that featured a frontcourt of Alonzo Mourning and Dikembe Mutombo. Those guys forced Johnson to the perimeter, but he still managed to score 20 points as the Runnin’ Rebels had to down-shift to win 62-54.

Arizona fans hated UNLV at that time, and Tarkanian wrote about playing in Tucson for the Las Vegas Sun in 2010.

“Our fans who traveled to the game said they were treated so badly,” Tarkanian wrote. “They would go into restaurants and have a hard time being served. To this day, John Thompson will tell you that was the only time Georgetown got cheered on the road.

“They were always considered the villains because they were a pretty rough and physical team. But when they took the court against us in Arizona, they received a standing ovation. You could say we got the last laugh. We beat Georgetown and advanced to the Final Four.”

Yes, but that’s when Duke shocked the Rebels and ended Johnson’s college career.

The Admiral was still at Navy when he was part of the Lute Olson-coached U.S. team that participated in the 1986 World Championships. Olson’s team trained in Tucson and played two exhibition games at McKale Center in June.

That team, which featured Sean Elliott and Steve Kerr, beat the Houston Flyers (a team of former college stars, including Arizona’s Eddie Smith) and then the New Zealand national team at McKale.

The U.S. team would go on to win the gold medal, even though Kerr tore his ACL in the semifinal game, costing him the 1986-87 college season. Team USA beat the Soviet Union in the final — the only World Championship ever won by the United States with purely amateur players.

Olson kept his gold medal in his McKale office until his retirement.

Carroll, a 7-foot-1 center, was a Purdue sophomore when the Boilermakers traveled to Tucson on Dec. 10, 1977. Arizona had won 38 consecutive games at McKale Center and sixth-year coach Fred Snowden had never lost a non-conference game at home.

Carroll changed all that. In one of the great individual games ever against the Wildcats, he posted a triple-double — 16 points, 16 rebounds and 11 blocked shots — as Purdue won 80-78. Arizona’s Robbie Dosty missed the front end of a one-and-one free throw shooting opportunity with two seconds left.

UCLA had won seven consecutive national titles when it opened the 1974 NCAA Tournament in the West regional semifinals at McKale Center, which was just over a year old.

The Bruins, led by Walton and forward Keith Wilkes, might have been expecting a walkover against Dayton — which was a 20-point underdog — but the matchup turned into an epic three-overtime affair. The Flyers missed a shot with a few seconds left to win it in regulation.

Walton had 17 and 9 as UCLA won the West Regional at McKale with a much-easier 83-60 victory over San Francisco. The Bruins’ title run then ended in the Final Four against North Carolina State.

Walton, who averaged 19.3 points and 14.7 rebounds as a senior, is now a love-him-or-hate-him figure at McKale Center when he brings his unique personality as a broadcaster for ESPN and the Pac-12 Network.