Pac-12 commissioner Larry Scott met with Arizona coaches and senior officials today as he annually does with member institutions around a conference football game to acquaint himself with staffs.

Arizona hosts Utah tonight at 7:30 p.m. in the Pac-12 opener for both programs.

An important development concerning the Pac-12 was published yesterday by Jon Wilner of the San Jose Mercury News that detailed the struggling viewer ratings of Olympic sports on the Pac-12 Network. 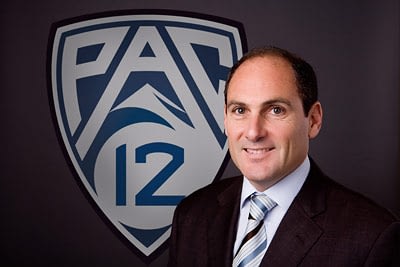 Here is a part of Wilner’s report that reveals how poor the ratings are for the Olympics sports, which may have been discussed as part of Scott’s meeting with coaches and officials:

During the Saturdays covered in the ratings window obtained by the Hotline, there were four broadcasts of Olympic sports events on the Pac-12 Networks’ national feed.

Ratings are measured in 15-minute segments, so a four-hour football game would have 16 segments.

The four Olympic sports events in question had a total of 22 measured segments. Of those, 21 registered a zero.

That doesn’t mean that zero people, literally, are watching. But it means that so few people are watching, it doesn’t register with the rating service.

Wilner, who has covered the conference for almost 30 years, concludes that the Pac-12 should have adopted a business model similar to the Big Ten in how that league’s network handles programming.

“The (Pac-12) has devoted immense resources to a business model (six regional feeds) designed showcase Olympic sports that are drawing zero ratings, instead of pursuing a model that would surely be more lucrative and visible,” Wilner writes. “Had the Olympic sports not been at the center of the business model, the conference could have created a traditional structure, like the Big Ten Network, with a single national network that featured football and men’s basketball, with Olympic sports scattered throughout.”