NOVA Home Loans Arizona Bowl committee chairman Ali Farhang blended in with all the smiles beaming from New Mexico State’s players while they stood on top of the podium when receiving the victor’s trophy.

It’s fitting that New Mexico State’s winning touchdown in overtime was scored on a 21-yard run by Larry Rose III because the game was as beautiful as a rose for Farhang.

“This is what college football is all about,” said Farhang, his voice raised above the din of celebrating New Mexico State fans on the Arizona Stadium turf after the Aggies’ 26-20 win over Utah State. “This is what the college football bowl experience is all about. We’ve brought communities together from New Mexico and Utah, from Tucson, Ariz., Southern Arizona … It doesn’t get any better than this. Who’s got it better than us right now?”

That’s really a fair question to ask aside from the higher-tier bowls. 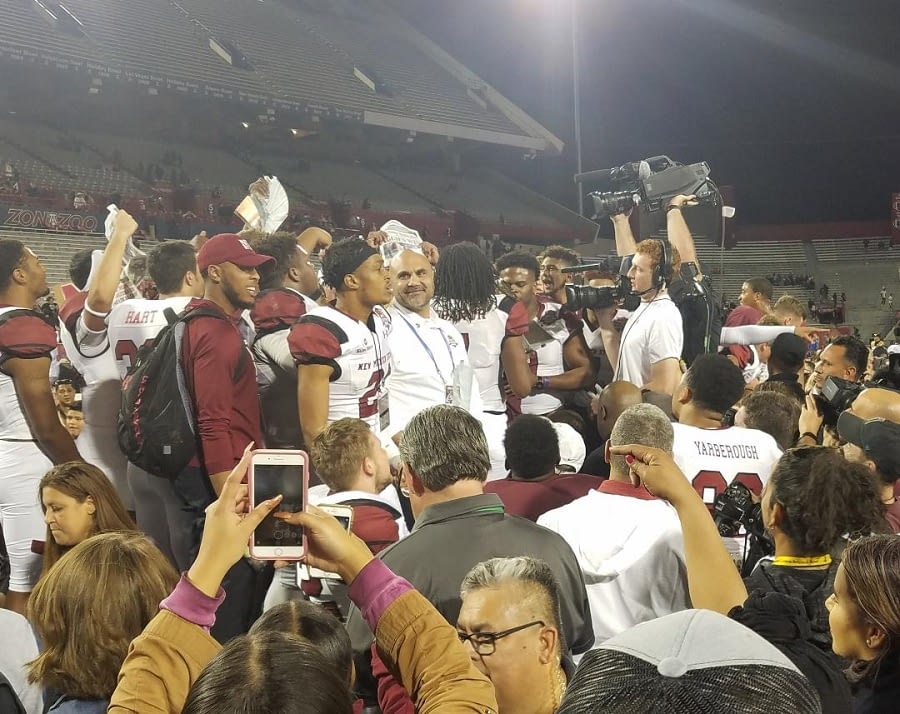 Arizona Bowl committee chairman Ali Farhang smiles in the center of celebrating New Mexico State players after the game won by the Aggies in OT at Arizona Stadium (Javier Morales/AllSportsTucson.com)

Friday night’s game drew a record 39,132 fans for the Arizona Bowl, in its third year of existence.

Attendance for other bowl games this year:

You get the point.

The Arizona Bowl showed the nation on the CBS Sports Network — the first network to televise the event after the game was Internet-only the first two years — that it belongs.

“Everything went right — from the title sponsor, to the staff and the volunteers who put this on, it takes a great team to put together an event like this, and we then we got two great teams put on an epic battle in the bowl game of the year,” Farhang said.

This is what happens when you play in and win a bowl game for the first time in 57 years @NMStateFootball @novaAZBOWL pic.twitter.com/2jWQgDmkpW

Asked about his biggest concern entering the game, Farhang said, “It was we weren’t going to have enough seats (filled) and we’ll just keep working on that because this is going to be something we’re going to build upon with a tradition in Tucson where New Year’s Eve comes early to Tucson every year.

The first game in 2015 between Colorado State and Nevada — both teams from the Mountain West Conference — drew only 20,425. The second game last year between Air Force and South Alabama had a heavy Air Force contingent with the Davis-Monthan base here. The attendance was 33,868.

Friday’s game fed off the first bowl appearance in 57 years for New Mexico State, whose fan base was hungry for a postseason berth and showed it with more than 10,000 fans in attendance.

“To sell more than (the allotted) 7,000 tickets and to have more than 10,000 Aggie fans here and to win in this fashion is nothing short of being in a fair tale,” said New Mexico State athletic director Mario Moccia, an alum of the Las Cruces, N.M., school. “The bowl was unbelievably first class, from the sponsors to all the bowl personnel. Everything has been unbelievably first class. The guys had a phenomenal time and this win is the cherry on top.”

How could the Arizona Bowl top this other than selling more than 50,000 tickets?

It’s not too often a bowl draws two regionally close teams like Utah State and New Mexico State with one team practically desperate for a bowl berth. Every year won’t be like this. In a Catch-22, the bowl hopes to draw more traditionally strong programs to boost its profile.

It can hope for another New Mexico State to come along but that does not happen often.

“You’re either getting better or getting worse,” Farhang said. “You’re not staying the same. We’re going to build on this and go to the next step. There’s no reason why the NOVA Home Loans Arizona Bowl can’t be one of the most preeminent bowls in the bowl cycle.

“Last year, we were the second-highest attended non-BCS bowl game.”

He looked at the upper portion of the east side of Arizona Stadium and added, “We’ve got flags up on the top deck. Why can’t we have every seat filled instead?”

“Giving is contagious right?” Volpe said. “We’re the first and only bowl game in which 100 percent of the net proceeds go back to charities. The more you give, the more the community gives back. That’s why each year we keep raising the bar and more fans are coming. We had 40,000 roaring fans tonight. That’s phenomenal.”