March Madness to the Tucson Sugar Skulls involves starting their inaugural season in the Indoor Football League at San Diego on March 3.

That’s only three weeks from now.

They can’t waste time. They have to “get ready to roll,” as head coach Marcus Coleman would put it. 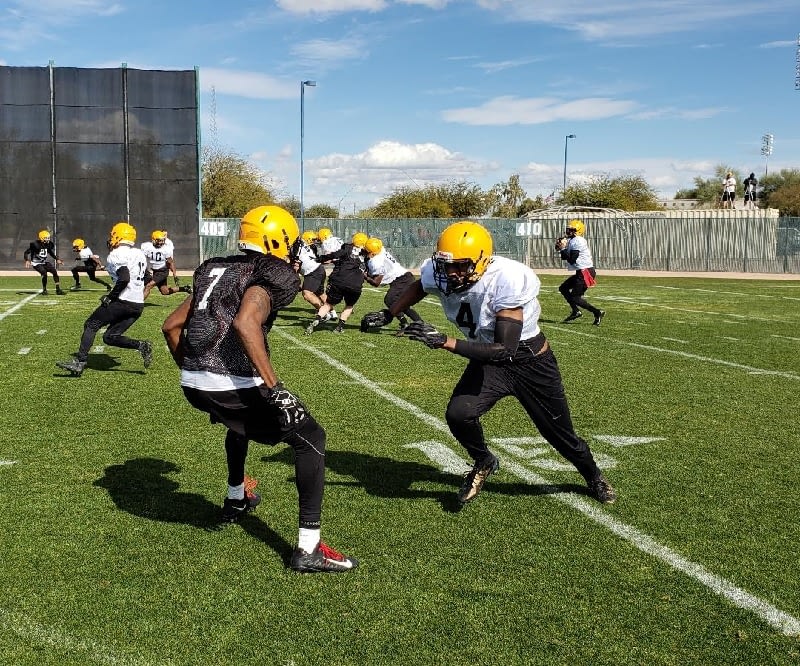 Their first practice behind them today, they have little time to get ready.

That’s just how Coleman wants it — fast and furious. He made a point to interrupt practice, shouting at his players in his booming, no-nonsense voice, to tell them that lollygagging (PG version) will not be tolerated when they have to get ready for the next play.

“This game is, particularly the indoor game, all about tempo when you talk about offense,” Coleman told reporters after practice. “You have to be in the flow of the game, have rhythm, have good tempo. I don’t want to be one of those teams that we’re dragging to the line, getting delay-of-game penalties, things like that.

“You should be to a point where you understand what the play is, so get the play in, in and out of the huddle, get to the line. Get set and get ready to roll.”

Many of the players have an indoor football background so they understand where Coleman is coming from.

More than that, they know of his 11-year NFL career, beginning with a six-year stint as a defensive back with the New York Jets from 1996 to 2001. His position coach for three seasons there was none other than Bill Belichick.

Former Santa Rita and Pima College standout Cam Gaddis, part of the defensive secondary Coleman said he was pleased with in practice, takes notice with whatever Coleman has to say.

“That’s a blessing, you couldn’t ask for anything more than that … a head coach that has DB experience and played in the NFL for 10-plus years?” Gaddis said. “When he’s talking, you zip it, get your notebook out and you take notes. It’s definitely an honor.”

“I thought the (defensive back) group was good, to tell you the truth,” said Coleman, who said his team worked on only one or two coverages in practice. “Obviously, there’s some technical things that need to get worked on. But in regards to coming out of breaks, ball-skills, things like that … being able to communicate in the back, which I thought we did pretty well today considering it was the first day … I thought we did a decent job.”

The first practice for an expansion IFL team has the unique perspective in which many of the players might know more about the head coach than vice-versa. A definite “learning curve” for the coaching staff exists, Coleman said, when piecing together a roster of 35 players who were part of various other teams last season.

Coleman added that the “canvas is blank,” with no starters and a depth chart at the outset of practice.

“There’s a few guys that I know from past teams and there’s a couple of guys from other teams that came here, but for the most part, it’s a learning experience for me,” Coleman said. “I’m getting to know the attitude of the players and physically what they can do … what they can do in regards to what we’re running schematically on both sides of the ball.”

Coleman, most recently the defensive coordinator with the Iowa Barnstormers, said he is using some of Belichick’s attention-to-detail coaching philosophies with the Sugar Skulls in their initial workouts.

“The tempo … getting in and out of the huddle … the little things,” Coleman said. “So many people focus on the schemes and things like that. Yes, that’s a huge part of it, but the little things are the more important things.

“Getting in and out of the huddle, make sure you get the right call, make sure your technique’s right. Those are the things you have to work a lot harder on then just seeing what the scheme means and know what it is. What your drops are … hand placement for D-linemen to O-linemen … those are things that get you over the top. We’re going to work hard on those things.”

Their fans and family will identify with them and help fill seats at the Tucson Arena.

Metz, Jones and Gaddis mentioned what will really bring Tucson fans out to watch the Sugar Skulls will be the fast-paced exciting brand of football, in an arena that will have the loud sound of a concert.

“Just expect to be in the action a lot more than a regular football game,” Metz said. “You’re right against the field, especially the first-row fans. Expect balls to be flying into the stands. You get to keep the balls. Very fast-paced. There’s a lot of entertainment between plays, during halftime and stuff. Not only is it a football game but there is a lot of other stuff going on that will keep people entertained.”

True to Coleman’s get-it-done-swiftly mantra, the Sugar Skulls will have their first scrimmage right away, on Wednesday morning against the Arizona Rattlers at the Kino Sports Complex. The Rattlers are coached by Kevin Guy, who also is the owner of the Sugar Skulls.

“I’m glad the scrimmage is actually early for us because it breaks up the monotony a little bit,” Coleman said. “Being in camp sometimes you can get bored. … I’ve been through that many, many camps, so I definitely understand that.

“Having an early (scrimmage) is actually good for us because you get to see a different team, you get to see different plays, different guys, things like that. The tempo will be the same because the Rattlers’ tempo with Kevin, I know he likes to run his program the same way. You’ll see some guys flying around … I think the guys got the message today from me. You’ll see the same thing from his team. So I think it will be good.”