During the basketball pregame radio show Sunday on KCUB 1290-AM, former Arizona running back Kelvin Eafon — a captain of the 12-1 team in 1998 — talked about his memories of teammate and fellow Texan Yusuf Scott, who passed away Saturday.

Scott, nicknamed “Big Yu” and “The Big Stack” because of his formidable size listed at 6-foot-3 and 345 pounds and ability to flatten opposing defensive linemen, was eulogized by many of his teammates and former Arizona athletes on social media on Sunday. He was only 42.

Eafon, from Seagoville, Texas, made reference on Twitter about his bond at home with Scott, who hailed from La Porte, Texas.

Proud to have played with #72 Yusuf Scott! My Texas 🐻⬇️ Brother was the 🥞man 98’ 🏈season RIP💔 pic.twitter.com/eaVRgMvMlj

“He was a big guard on the right side. Running behind ‘Big Yu’ you knew you didn’t have to worry about two guys on that side. He was going to destroy the defensive tackle on that side,” Eafon told pregame show host Mike Luke. “He’s one of those guys you’re running down the field and you know he’s down there getting another block. He was a great guy to play with.”

The reason for Scott’s death has not been made public. His brother Hoza Scott mentioned on a Facebook post that Yusuf “faught hard” before his passing. Eafon mentioned that Scott had difficulty keeping his weight down during his playing days because it “was out of his control.”

“A lot of the guys sacrifice their body having to add a lot of weight,” Eafon said. “A lot of the guys end up being bigger than what they should be. I just hate to see something like this happen. I really care about Big Yu.”

Remember being in Phoenix when Yusuf Scott was drafted by the Cardinals in 1999. Was at Cards camp when he was introduced. He was so calm, so inviting, smiling, and chatting with reporters. That kind of confidence and engagement defined him. That is how I remember him.

Luke asked Eafon if Scott, who was known for his affable personality, was like a big teddy bear off the field.

Eafon went on to recount the peculiar relationship Scott had with diminutive former Arizona women’s basketball player Lisa Griffith, who stood at only 5-foot-3, during their Wildcat careers. 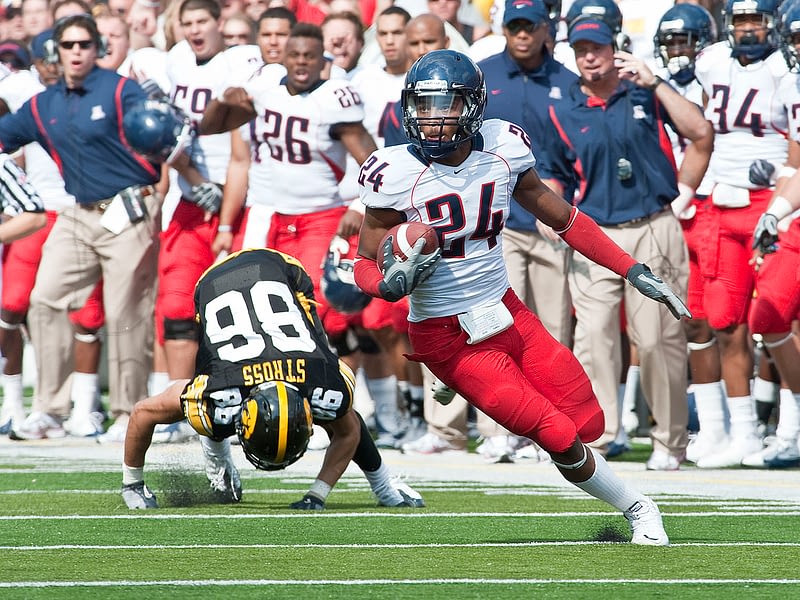 Share Tweet The Arizona Wildcats football team is open for business again in the state of Texas. The Lone Star State, ignored for too long by former head coach Rich Rodriguez — he didn’t have close ties to the region — is a perfect fit for new head coach Kevin Sumlin, who was the head […]

Scott originally came to Arizona as a defensive tackle out of La Porte but was slotted at right guard because of his weight issues, Eafon said. Scott was still a tremendous athlete. Believe it or not, he played point guard for the basketball team in high school.

Former Cardinals lineman Lester Holmes told me when I covered the team while living in Phoenix that Scott “has nice feet … he’s like a ballerina out there.”

Eafon commented yesterday that “if he could have kept it down to about 320, 330” Scott could have had an extensive NFL career. He played three seasons with the Cardinals before playing one year for Berlin in NFL Europe.

“It was one of those things that Coach (Dick) Tomey and Coach (Charlie) Dickey were great at — Coach Dickey coached the offensive line — they noticed a talent. I remember watching with my own eyes them shaping him into an offensive lineman that ended up being All-Pac-10 and drafted by the Cardinals.”

When Scott was drafted by the Cardinals, Tomey said, “The thing I admire about him the most is his work ethic.” As a person, Scott was “very affable and enthusiastic,” Tomey said. “He’s a joy to coach and be around.”

An example of Scott’s ability to draw laughs: He mentioned that he would wager Cardinals quarterback Jake Plummer, a former ASU rival, on the outcome of the Arizona-ASU games.

“We’ll bet dinner and I’m going to remind him that I can eat,” Scott said.

He also was awarded the Morris Trophy by the Pac-10 in 1998– an honor voted on by opposing defensive linemen. Scott is one of only two Arizona players to earn that honor. The late Joe Tofflemire, the best center in Wildcat history, is the other.

Scott left Arizona after his junior season to help his mom with her financial situation after raising three boys. NFL draft analyst Mel Kiper Jr. at the time said Scott “can move an 18-wheeler off the line of scrimmage.”

Here are some social media reactions of Scott’s passing:

RIP Yusuf, one of the coolest cats ever. All love bro. https://t.co/ZXZfXNSoKa

A big guy with an even bigger heart. My thoughts, prayers and condolences are with the Scott family. Heaven couldn’t wait for you! Rest In Peace Big Yu! 🕊 https://t.co/wec699mTic