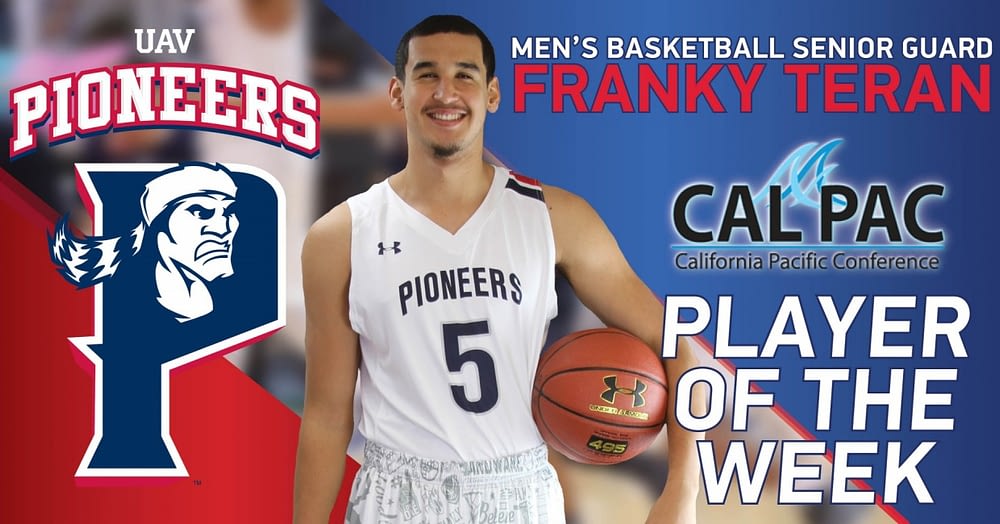 University of Antelope Valley Men’s Basketball guard Franky Teran (Pueblo) was recognized as the California Pacific Conference Player of the Week for Jan. 30, 2017.

This is the second time Teran, a 2015-16 Honorable Mention All-American, has earned the award this season. In his first honor, Teran earned the Cal Pac award for his accuracy beyond the arc in the victory over Shepherd (Dec. 2016). native drained 8-of-12 treys, 11-of-16 overall from the floor, in route to a 38-point performance for the Pioneers.

This time around, the senior guard put up a 31-point, 6 assist performance on 11/15 shooting including 9/13 from behind the arc in route to a 105 to 103 win over La Sierra. The win was a full team effort with 34 total assists with only a mere 6 turnovers and keeps the Pioneers in 2nd place in the Cal Pac standings.

This season, Teran is averaging 18.9 points, 4.1 rebounds, and 2.4 assists per game. The sharpshooter is efficiently shooting 46.9% from the field and 49% from the three-point line which currently ranks 7th in the NAIA Division 2.

“Franky has continued to put in extra work to be successful in the Cal Pac,” said UAV Men’s Basketball Head Coach BJ Porter in a news release. “Our team’s unselfishness and ability to move the ball has given Franky a lot of good opportunities to be effective and he has done a great job of seizing those opportunities. This team has worked extremely hard all season long and our success in the Cal Pac thus far is evidence of that. We are focused on finishing this season strong.”

Former Salpointe standout Dylan Greenberg (Kentucky) and Sabino standout Andrew Mike (Florida) were named to the SEC Academic Honor Roll for the fall of 2016. Greenberg is getting a degree in finance and Mike is working on a degree in Applied Physiology & Kinesiology.