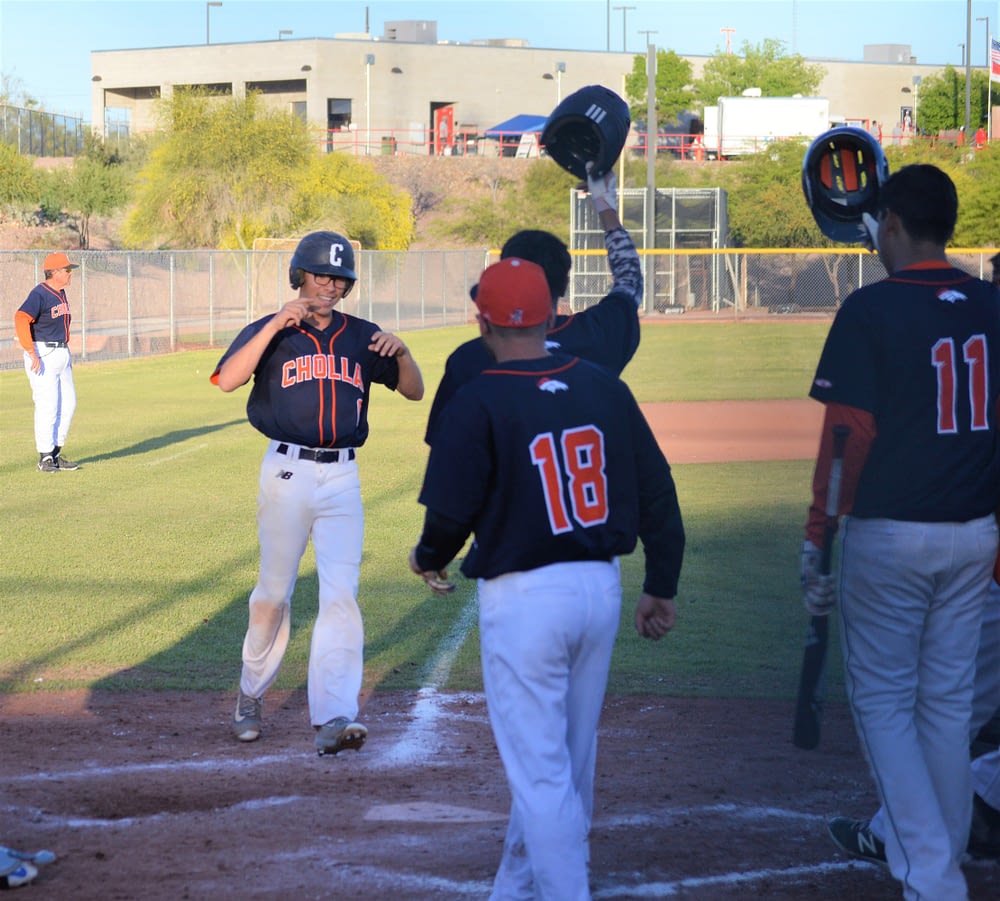 Arman Figueroa is greeted at home after his home run (Andy Morales/AllSportsTucson.com)

The Cholla faithful know all about the run-rule. Ask them. The Chargers have been on the receiving end of the run-rule more times than I would ever mention in print but it’s part of the game, part of the learning process, and it looked like it was going to happen again.

The Chargers (2-14) took the field Wednesday at the Chris Moon Memorial Tournament and waiting for them was a team from Los Angeles. Locke came into the tournament with a respectably 9-1 record but a couple of setbacks to Pomona (Colorado) and Tucson on Tuesday dropped their record down to 9-3.

The Saints were looking to get back on track and they posted three runs in the bottom of the first and four more in the third to a take a comfortable 7-0 lead over Cholla. It looked like the game was going to end quickly but the Chargers showed some fight in the top of the third to stay alive and it all began with a leadoff double from sophomore Genaro Moran.

Ricky Quiroz followed with a single and the Chargers had two men on with no outs but senior pitcher Eduardo Macias came up with the defensive play of the game to temporarily stall the comeback.

Gabe Arsola hit a rocket up the middle but Macias was able to snag the shot on his follow through off the mound and then he fired the ball to first base to double up Quiroz who, understandably, took off for second on what looked like a hit to centerfield.

Undaunted, Arman Figueroa reached on an infield hit to score Moran. Chris Rico followed with another hit and then Marc Ruedas drove in Figueroa. Macias induced a pop fly to end any further damage. Still, Locke was leading 7-2.

Jesus Bujanda settled down and he held the Saints scoreless in the bottom of the third.

David Velador started the top of the fourth with another leadoff double and the Chargers were at it again. Martin Vasquez singled home Velador and then Moran hit a shot to right field but Vasquez was thrown out trying to advance to third base on the hit.

Macias picked up a strikeout but Arsola followed with a walk and then Figueroa knocked in Moran to cut the Locke lead down to 7-4.

Vasquez took the mound for Cholla and he held Locke scoreless in the bottom of the fourth. Then came the fifth.

Cholla sent 15 batters to the plate in the fifth and, by the time Locke recovered, Cholla was leading 15-7. Run rule? The game had flipped.

Figueroa took the ball in the fifth but the Saints were able to get one run back to cut the Cholla lead down to 15- 8.

Figueroa had one bad at bat the whole game but the rest was almost perfection. He had two singles, a double and three RBI. Oh, and he threw two innings, what more could one ask?

Arsola walked with one out in the top of the sixth and Figueroa blasted a home run to give him two more RBI and, more importantly, a 17-8 lead over Locke. Rico and Ruedas reached on back-to-back errors and the Chargers were back in business.

Andres Glenn brought in Rico and Velador scored Ruedas to make it 19-8 heading to the bottom of the sixth.

The Saints were able to put two men on but there were two outs. Figueroa picked up a strikeout and the game was over. Some of the fans were so stunned, they didn’t know what the score was or if the game was actually over but the scoreboard did not lie.

Here is the schedule for Thursday at Cherry Field at the Chris Moon Classic: