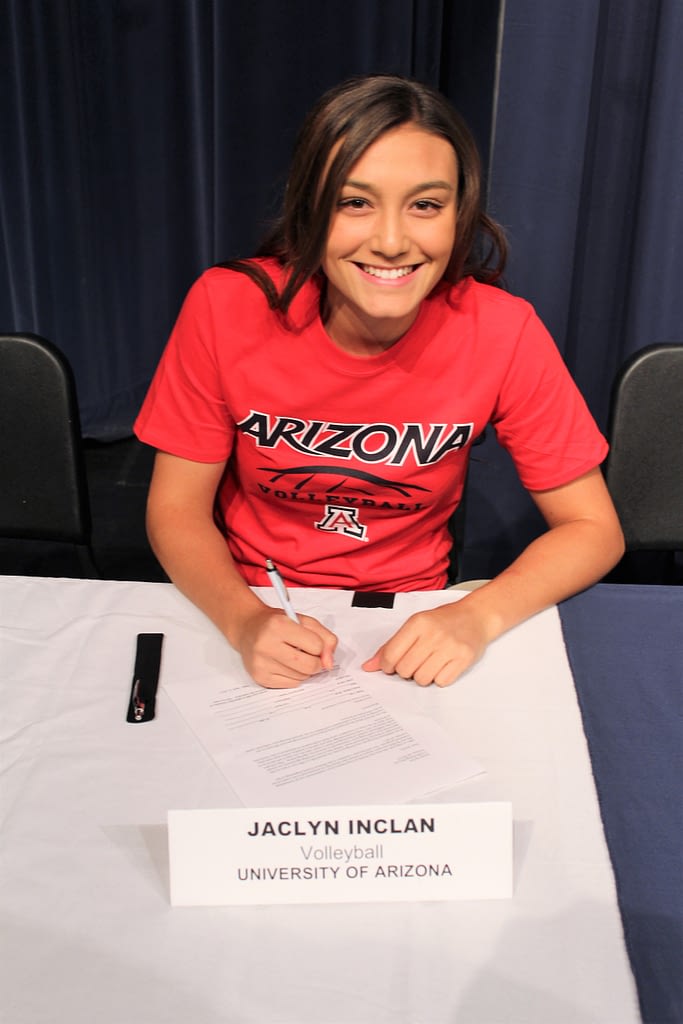 120 miles, eight schools and 70 athletes, and AllSportsTucson.com was there to capture and preserve the many special moments for the families and for the local community.

The day started out at Ironwood Ridge where ten standouts signed their names to play at the next level including University of Arizona indoor and beach volleyball commit Jaclyn Inclan.

“I’m so nervous yet this is literally my dream come true,” Inclan said. “I was looking for a school in California but Arizona is everything I have ever wanted.”

A drive to Pueblo was next where 16 athletes were recognized including NAU commit Michael Beltran.

“I went to Junior Day at NAU and I really fell in love with the program,” the defensive lineman said. “It came down to my last three choices and I accepted the offer to be a preferred walk on. It was the best choice for me.”

Mya Cabral is going to play softball for Pima. “It’s close to home and I’ll be able to study secondary education, Cabral said. “I had some teachers make an impact on my life and I’d like to do the same for others.”

Shadie Dabdoub was part of a large group of athletes trying out for the Eastern Arizona cheer squad and she made it. “It was a last-minute thing,” Dabdoub said. “There were about 30 people trying out for 12 spots and they called me back two days later. I said yes of course!”

Dick Tomey and his wife Nanci Kincaid were on hand at Pueblo along with his former Arizona standout Kelvin Eafon. Eafon is the basketball coach at Pueblo. (Andy Morales/AllSportsTucson.com)

Next up was a drive back to Mountain View to see 12 athletes celebrate including Arizona football commit Isaiah Lovett.

A VIDEO INTERVIEW OF LOVETT IS HERE

Andrea Hernandez is slated to be an infielder for Chandler-Gilbert. “It feels awesome to get a chance to play some more,” Hernandez said. “I’m ready to go play. I’m really excited.”

A drive across town brought us to The Gregory School where our Southern Arizona Basketball Player of the Year, Taylor Thompson was signing her name to play for Concordia.

“It’s like a huge weight off my shoulders,” Thompson said. “I’m going to go in and work hard for a spot. I will always prove I belong, prove I deserve a spot on the floor.”

Back across town, Tucson High followed where 10 athletes signed their names, including volleyball standout Elias Baer. Baer is the first male volleyball athlete from Tucson High to earn a scholarship since Joe Kay in 2004.

“It’s a little bit of a relief,” Baer said. “I feel blessed by my family, coaches and teammates. I couldn’t have got this far without the platform they gave me to succeed.

“The competition in Tucson has grown and it’s nice to know I have been a part of it,” Baer added.

A long drive east to Rincon/University followed where seven athletes were honored then an even longer drive followed to Oro Valley where nine athletes from Canyon del Oro were recognized.

Salpointe held their ceremony at the end of the day also and our editor, Javier Morales, was on hand to witness that important event.

ALL photos from this long day are FREE for the families to enjoy. We apologize for any misspellings or incorrect schools. Please let us know so we can correct any errors.

Some of the top athletes in Arizona started the day off at Ironwood Ridge (Andy Morales/AllSportsTucson.com)

Former Wildcat and NFL standout Brandon Sanders introduced the athletes at Pueblo. Sanders is the AD and the football coach at Pueblo. (Andy Morales/AllSportsTucson.com)

A great day to be a Lancer (Javier Morales/AllSportsTucson.com)

Once a Badger, Always a Badger (Andy Morales/AllSportsTucson.com)