So Chance Comanche you are gone. We hardly knew you.

Rarely did we get a chance to see you in a press conference and rarely did you have a good enough game to warrant UA officials to bring you in. That’s just the reality of it.

Where are you getting your advice? Good luck with that. 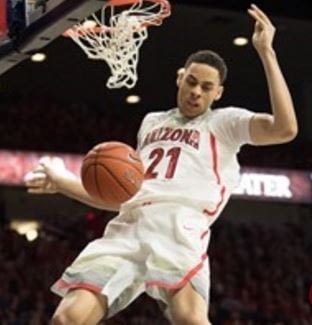 Still, good luck at your next stop whether it be in the NBA, the D-League or overseas.

Good luck in your decision to not come back to the UA. It’s a decision that didn’t take me by surprise as much as Grant Jerrett’s did a few years ago when that seemingly came out of the blue.

I argued then that it was a bad decision for Jerrett and that he’d be lucky to stick and local media-type argued with me saying he’d have a 10-year NBA career. Jerrett didn’t even make it to a 10-game career, although he did make nearly $1.8 million from the NBA. I don’t know what his salary is now while playing in China.

Comanche could be headed there, too, although he’s taking a chance that he won’t be after declaring on Twitter this afternoon. Of course, he thanked all involved, including head coach Sean Miller for allowing him to be part of a “great program.”

As of 5 p.m., there’s still no word from the program he played for for their reaction to the news, although I’m pretty sure they saw this coming. Is Rawle Alkins next? My guess is Alkins will return but that’s just a guess.

Such is the world these days with recruiting players where one of their priorities is getting to the NBA – whether they are ready or not. And that’s even with a modest 6.3 points per game and 3.6 rebounds per game average. But he feels he’s ready, although he was not invited to the NBA Combine next week.

He’s on a personal crap shoot.

The biggest question is: is Comanche ready? My guess he’s not. Would he have been in a year or two? Maybe better but not fully prepared. But it hit me sometime in January after one of his good games (he didn’t have many where he was the star) where I said this guy has a future in the NBA. He runs well, he can shoot from 12-15 feet, he’s aggressive around the basket and he’s athletic for a 7-footer. Maybe next year he’d be ready given his progression. Miller talked about his potential often. To Comanche’s credit, the NBA is all about potential.

That said, Miller also spoke about his maturity or lack there of. It became apparent in November of last year when Comanche was suspended for a game for academic reasons.

“Chance Comanche will not play in tonight’s game due to his own lack of academic responsibility,” Miller said in an emailed statement at the time. “As a member of our basketball program, you are a student and an athlete, and you are expected to do the best of your ability in both areas. It is not an option to compete and be held accountable on the court but not in the classroom. This suspension is indefinite.”

It lasted about a game. My point here is academics – and staying eligible – are important here (and everywhere), but I’m not sure how important it was to Comanche. But school is part of the deal. Heck, as good as a guy as he was Michael Wright didn’t like school, but loved playing basketball. He decided to leave after his junior year, likely knowing his chances of making an NBA roster was a long shot given his size or lack there of in playing close to the basket as a smallish power forward. To his credit, he had a solid career overseas.

And, well, there’s no harm in that. That’s to be applauded.

We’ll know soon in the next few weeks if Comanche’s decision was a good one. Heck it might take a couple of years to give the full evaluation of his decision. But it’s his decision … a head scratcher, but his.