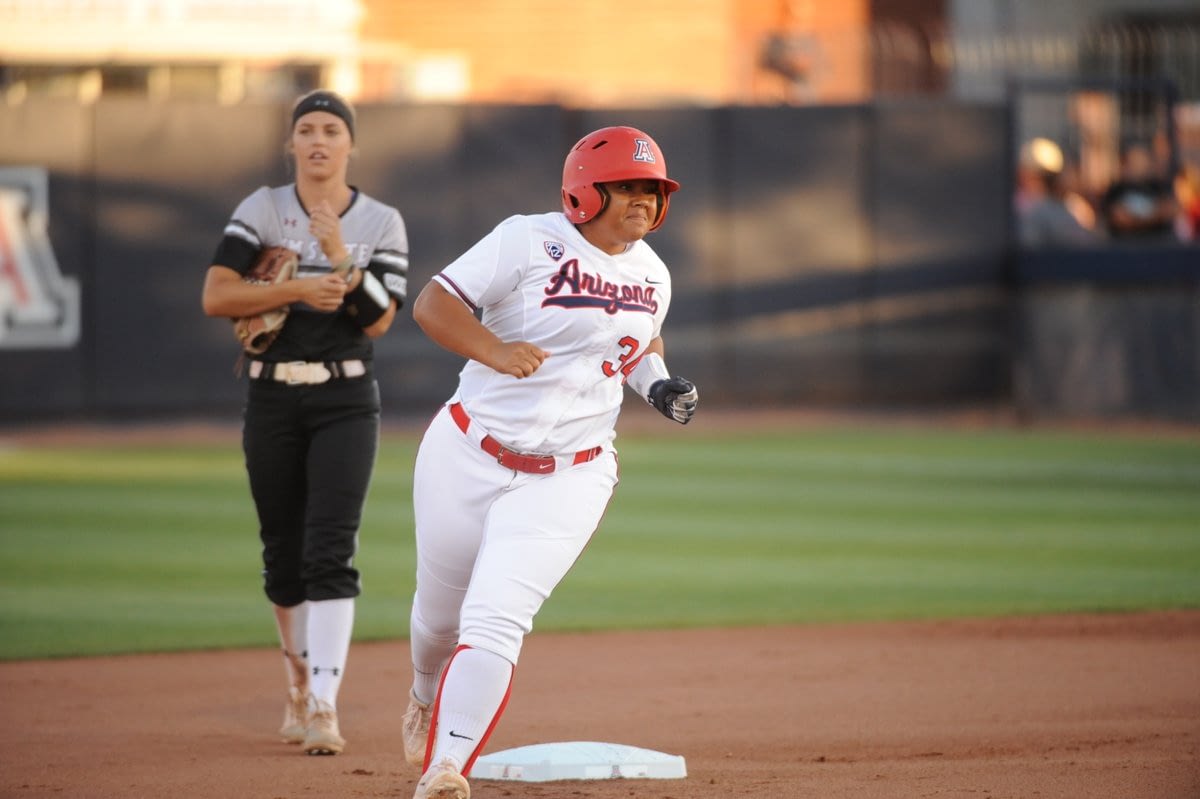 Katiyana Mauga rounds the bases after hitting her 90th career homer — 23rd of this season. (Photo courtesy of Arizona Athletics)

The Arizona softball team took care of business to open play in an NCAA regional, but it wasn’t all home runs and mitt-popping strikeouts at Hillenbrand Stadium on Friday night.

The story was the knee brace on Alyssa Palomino’s left leg.

It was about her standing on the field after the game, as fans filed out and players headed to the locker room, talking with coach Mike Candrea. The conversation ended with a hug that seemed to signal that not everything was right.

Soon after the Wildcats wrapped up their press conference following an 11-0, five- inning victory over New Mexico State, the school announced that Palomino, a slugging redshirt freshman center fielder, had suffered a torn ACL.

She sustained the injury in practice this week. She suffered a torn right ACL on the first day of fall practice in 2015, forcing her to miss the 2016 season.

Arizona loses a middle-of-the-order right-handed power bat. Palomino hit .302 this season with 16 homers (third on the team) and 54 RBIs (second on the team).

Candrea can plug in experienced senior Eva Watson, who is a left-handed slap-hitter who won’t drive the ball for extra bases. But she is a career .317 hitter who likely will make her 70th career start when Arizona, seeded second overall in the NCAA tournament, plays South Carolina at Hillenbrand Stadium at 2 p.m.

“Unfortunately, you have to move on,” Candrea said.

“Luckily this team has someone it can put into the lineup and fill that void. If Eva can get on base for us, then good things can happen, because she is so quick.

“The big thing with her right now is getting her to calm down a little bit and slow things down and put the ball on the ground. The ground is going to be her best friend. If she does that, gets on base, that’s going to be a big plus.”

Watson went 1-for-2 against the Aggies while her teammates took care of the long ball.

The Wildcats poured it on with seven runs in the third inning. Catcher Dejah Mulipola and Mandie Perez each hit long homers in the inning, Perez’s shot going off the Ina E. Gittings Building beyond right field.

Meanwhile, Arizona ace Danielle O’Toole (28-4) pitched an efficient three innings, striking out four. Taylor McQuillin, who struggled in her last few starts of the regular season, finished up by striking out all six batters she faced. She was throwing as hard as 67 mph.

“They hit every zone and I feel they attack the zone,” New Mexico State center fielder Victoria Castro said of Arizona’s pitchers. “There’s no pitch they take off. They attack the hitters.”

McQuillin’s outing was a positive sign for a team that will ride O’Toole as much as it can, but will need the sophomore to pitch key postseason innings.

“Looked good,” Candrea said. “She looked fresh. Had a little giddy-up. Loved the change-up that she threw. She was impressive.”

South Carolina (33-23) advanced to the winner’s bracket in the double-elimination regional with a 12-2 victory over St. Francis (Pa.) in five innings. The Gamecocks hit a season-high four home runs, two from freshman second baseman Mackenzie Boesel, who drove in eight runs.

“At this stage of the game right now, yes, you have to worry about your opponent,” Candrea said, “but, for me, I have to worry more about us and what we do. I think we’re ready.”

Sunday’s first game will be at 4 p.m., with a second game, if necessary, to follow.