Things looked bleak early for Sunnyside against San Xavier when the teams opened play in the District 12 Little League Baseball tournament in front of a large crowd at Mission Manor Park last night.

How crowded was it? When I went to my car to leave, a truck was parked right behind mine. That’s how people on the southside roll — one gathering, one family. I am from that area so I knew it was part of the ambiance.

Sunnyside starting right-hander Francisco Valenzuela and the defense behind him overcame a four-run third inning by San Xavier, rallying behind timely hitting, solid pitching and good defense to come out on top 7-5. 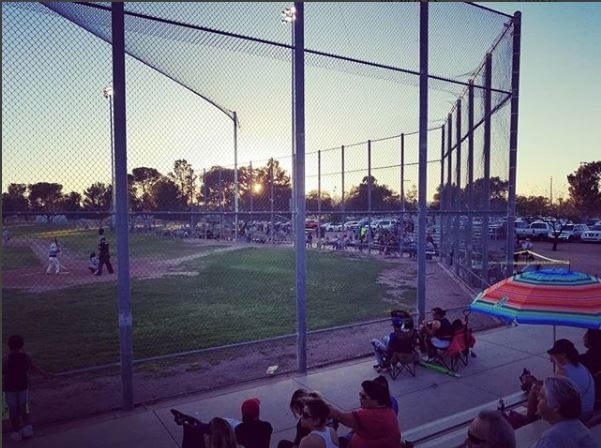 Sunnyside outfielder Gabe Ortiz went 3 for 3 with three RBIS, two stolen bases and two doubles. He later came in to pitch and struck out four batters while keeping San Xavier scoreless in 1 1/3 innings.

Reliever Roman Basurto got the save by getting the last two batters out, including a strikeout, with runners on first and second.

“Francisco struggled at first with the crowd and all the emotions that come with playing the game got to him,” said Sunnyside coach Frank Basurto of Valenzuela, who finished with seven strikeouts and only two walks in five innings.

“He started out slow but he battled and kept throwing strikes. He fought all the way through.”

Francisco Valenzuela struck out seven and walked only two in five innings to get the win for Sunnyside last night.

San Xavier took a 5-2 lead off five consecutive singles and an error that allowed leadoff batter Jacob Martinez to score. Gabriel Villa, who had an RBI single, scored the last run darting home from third when San Xavier’s pitcher Louis Martinez was stealing second. Sunnyside tried to get him out and the relay throw back home was not in time to get Villa.

Four runs across and still no outs — that’s when Valenzuela buckled down. He struck out two batters and got the next batter to hit into a groundout to end the inning.

From those last three outs in the third through the seventh, San Xavier did not get a runner past second base.

“Our guys keep battling. Our pitchers keep throwing strikes. Our defense keeps buckling down,” Frank Basurto said. “They know that defense is a big part for us and we work on it quite a bit. At the end of the day, these guys wanted to win and they shut it down.”

Valenzuela helped his cause with a sacrifice fly in the bottom of the third that cut the lead to 5-3. He scored Ortiz, who had singled and stolen second and third base.

Sunnyside took a 6-5 lead in the fourth rallying for three runs. Mauro Acuna had an RBI single and Ortiz plated two runs with a two-out double.

Gabe Ortiz was selected the District 12 Little League player of the game in Sunnyside’s win over San Xavier.

“Gabe’s one of our older players,” Frank Basurto said. “He’s a guy we count on in the middle of the lineup. He came out and had a couple of great at-bats tonight in key situations, driving in the runs.”

Sunnyside took a 7-5 lead in the bottom of the fifth when Jerry Coyle, pinch-hitting for Valenzuela, singled, stole second and scored on a groundout.

Ortiz took the mound in the sixth and struck out three of the five batters he faced.

“When it is his time to get on the mound, Gabe is one of our top guys as well as some of the other guys,” Frank Basurto said. “He came in and shut the game down.”

San Xavier was led by Martinez’s complete-game performance, striking out four and walking three in six innings. San Xavier shortstop Marco Jones went 4 for 4 with two runs and a double.

Sunnyside next plays Palo Verde tomorrow night at 6:30 at Mission Manor Park. San Xavier will play the loser of that game on Saturday night at 6:30. The championship game is Monday at 6:30 p.m..