We have reached only eight days until the Arizona Wildcats kick off their 2018 campaign under new coach Kevin Sumlin. The season begins when Arizona hosts BYU on Sept. 1 at Arizona Stadium. 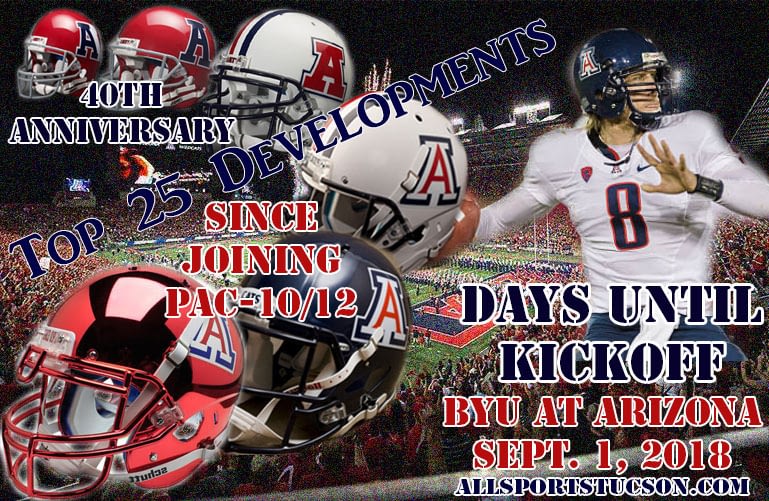 The late Larry Smith was an emotional coach who was the perfect guy to lead Arizona out of the troubling tenure of Tony Mason and into the competitive Pac-10 in 1980.

After Smith served as an assistant at Arizona under Jim Young, he returned to Arizona in 1980 as its head coach after coaching the Tulane program. He took the job under the cloud of a potential NCAA probation for infractions hat allegedly occurred under Mason (Arizona’s coach from 1977 to 1979).

Smith, who finished 48-28-3 in seven seasons at Arizona before leaving to USC, elevated the program despite the probation (that prohibited national televised games and banned the Wildcats from bowls) that was served in 1983 and 1984. He ended his last season of 1986 season with a 9-3 record and his fifth straight win over rival Arizona State and the school’s first bowl win, a victory over North Carolina in the Aloha Bowl.

One of Smith’s must impressive and endearing feats for Arizona fans was the Wildcats starting “The Streak” against ASU, an unbeaten stretch that began in 1982 and ended in 1990.

After Smith’s first two Arizona teams lost to ASU, the first time 44-7 and then 24-13, he made a vow to never allow the Sun Devils to beat his Wildcat teams again. ASU never did. Smith beat them five straight times, including 28-18 in 1982 when ASU was ranked No. 6 and in need of a win to reach the Rose Bowl and 37-14 when they were No. 4 and Rose Bowl-bound.

The best to wear No. 8 in Arizona history? That honor goes to the most prolific passer in school history — Nick Foles — who became a national sensation in February when he earned Super Bowl MVP honors. The Michigan State transfer took the starting job four games into his sophomore season, becoming the only Arizona player to reach five digits in passing yardage (10,011). He set the school record for passing yards in a season (4,334 in 2011) before the Philadelphia Eagles selected him in the third round of the NFL Draft.

Not to be overlooked with the No. 8 jersey — receiver/punt return specialist Dennis Northcutt, one of the most productive receivers and all-purpose threats in Arizona history who was part of the 12-1 team in 1998.

UNLV graduate transfer Tim Hough, a cornerback, wears No. 8 now. He spent four seasons at UNLV before coming to Arizona after redshirting in the 2014 season. He played in all 12 games in 2017 with 19 tackles and three pass breakups and all 12 games in 2016 with five total starts. He registered 28 tackles and was named preseason second-team All-MWC by Lindy’s. He made nine starts and played in 12 games as a redshirt freshman in 2015, totaling four interceptions and 32 total tackles.