The Badgers (3-5 overall, 3-1 in the 6A Metro) play another non-region game this Friday but they go from playing against a struggling O’Connor team to facing the No. 1 team in the state (4A to 6A) — Chandler — at Gridley Stadium.

— DB Sebastian Felix had an interception.

— DB Tristan Pralle had an interception and returned it 100 yards for the TD.

— DB Anthony Phillips had an interception.

— DB Rafael Moody had an interception.

— WR Anthony Galvez two receptions for 113 yards and a TD.

— WR Angel Cano had eight catches for 86 yards and a TD. He also had a 50-yard kickoff return. 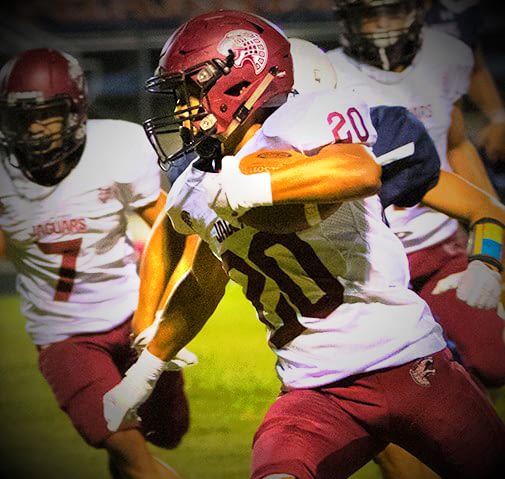 Share Tweet Desert View sophomore running back Carlos Alvarez gained 276 yards on 25 carries to help lead the Jaguars past Flowing Wells 40-37 last Friday night. Alvarez also scored four touchdowns to help move the team to 5-3 on the year. He also pulled down a 32-yard pass to finish with 308 yards …

— QB Giovanni Ciaccio completed 6 of 7 passes for 76 yards with a TD. He lso rushed four times for 66 yards with two TDs.

— RB Shaun Buttigieg had three rushes for 82 yards, including a 71-yard TD.

— RB Kollins Opokuh-Appoh had 64 yards on three carries and a TD. He also had a 15-yard TD reception.

— LB Daylin Smith had 1.5 sacks among his six tackles.

— RB Bijan Robinson rushed for 263 yards on 12 carries with four TDs.
He also caught two passes for 49 yards. He has 636 career points and 106 TDs to go with the other state records he holds. Saguaro’s Christian Kirk finished his career with 626 career points and 103 career TDs.

— LB Luke Regina had two sacks among his five tackles. He has 9.5 sacks this season.

— S Ethan Seppala had his fifth interception of the season.

— WR Austin Brooks had three catches for 26 yards and an interception.

— RB Isiah Hill rushed for 109 yards on 13 carries with two TDs and led the Panthers with eight tackles.

— RB/LB Julian Encinas had 81 yards on nine carries with two TDs and had a fumble recovery on defense.

— DE Travon Ballard had three tackles for loss, including 1.5 sacks, and a fumble recovery.

— QB A.J. Skaggs completed 15 of 24 passes for 167 yards with two touchdowns and no interceptions. Skaggs, a junior in his second varsity season, passed the 3,000-yard mark for his career. He is now at 3,139 yards in 20 games in his career.

— WR/DB Antone Brack had four receptions for 104 yards and a TD and also had 10 tackles.

— WR David Avilez had a 92-yard kickoff return for a TD.

— DB Steve Calvin had a 28-yard interception return for a TD.

— DB Anthony Clark had a 90-yard interception return for a TD.

— RB Jace Barney, Carson’s younger brother who is a sophomore, rushed for 101 yards on 16 carries with three TDs.

Willcox (4-4 overall, 2-1 in the 2A San Pedro) will look to win its third straight game when it hosts Tombstone on Friday.

— QB/DB Caleb Quintero had an interception on defense and a TD run and pass.

— DB T.J. Madrid had an interception.

— WR Jose Moreno had a 50-yard kickoff return for a TD.

Baboquivari finished its season 4-4 overall, its second non-losing season in the last 14 years.