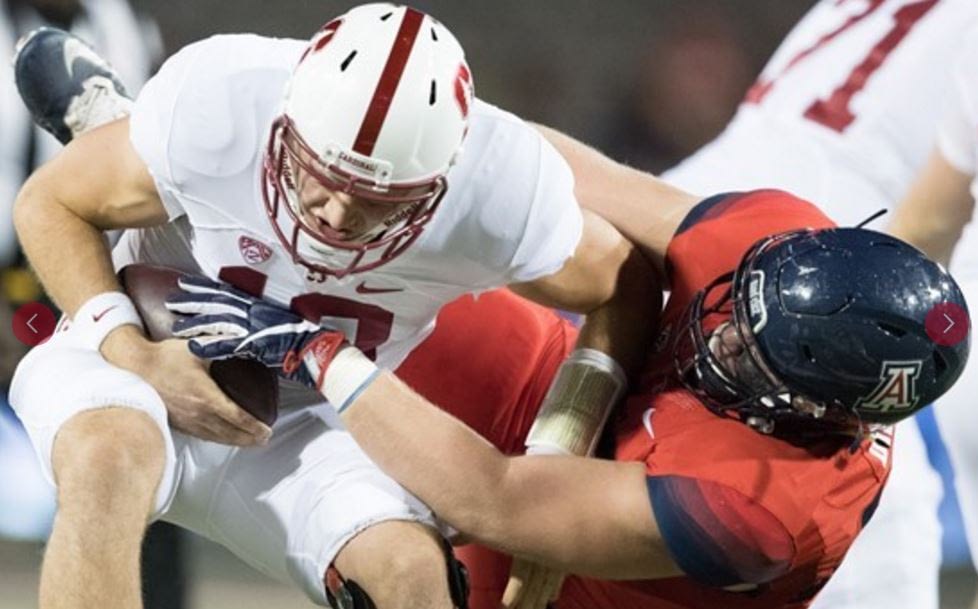 Are we there yet?

It doesn’t seem like it, so stop asking. The Arizona football free-fall hasn’t hit bottom, although you could be forgiven for thinking so, inasmuch as UA just lost 34-10 to Stanford on Saturday night when the Wildcats:

— Lost a fumble about two seconds after intercepting a pass

— Started a receiver at running back

— Lost their fifth consecutive game, matching their longest skid since 2011, immediately after which coach Mike Stoops was fired at midseason.

There are still four games left this year for the Arizona, which is 2-5 overall and 0-5 in the Pac-12, one of seven teams from the Power 5 conferences that haven’t found a way to win a league game.

None of this is complicated.

The triple crown of failure.

I kept thinking during the second half, as Stanford pulled away on the scoreboard and fans pulled away toward the exits, about one particular Arizona fan who always asks me on radio and on Twitter: “Is it time to push the panic button?”

If there ever was a passionless 3 hours and 20 minutes of football … on Homecoming … on a bee-yoo-ti-ful Saturday evening in Tucson … it was Saturday night.

“I want them to all really care,” coach Rich Rodriguez said of his postgame message to the team.

“I have a lot of guys in that locker room who really give a crap about what we’re doing, and it’s really, really important. There are guys like (defensive lineman) Parker Zellers and (receiver-turned-running back) Samajie Grant, where every play is like their final play; they play so hard.

“I have a lot of guys like that, but I just need everybody — whether they’re playing or watching on the sidelines — to have that same attitude. And I have a lot more than I don’t, but I need 100 percent of that.”

He’s right, but he’s also responsible for all that. Rodriguez is the one who always says he wants “guys who love football,” so his batting average of signing guys who love football is apparently not high enough. The last month of the season will further reveal the character in that regard.

On Saturday night, the Wildcats fell behind 14-0 after a scoreless first quarter, scored a touchdown on a 38-yard catch-and-run from receiver Trey Griffey — hey, a highlight! — but they kept sliding further behind, down 27-7 late in the third quarter.

It isn't iffy if it's Griffey! (s/o to @kenny_mayne for the throwback line) #STANvsAZ

And that was that.

A flash of fighting spirit was quickly extinguished.

Right guard Jacob Alsadek insists the flame still burns, and his personal passion was evident in the postgame press conference.

“Obviously, we hate losing,” he said.

From here, Arizona plays at Washington State on Saturday, and the Cougars are likely to enter the AP Top 25 on Sunday morning following their sixth consecutive victory. Then comes a UA home game against Colorado, which leads the Pac-12 South with a 4-1 mark.

The final two games are at 2-6 Oregon State and vs. Arizona State, which has lost three in a row and four of five.

Maybe there’s a win there at the end. Maybe not.

In the meantime, listen for the wind whistling past as the Wildcats continue to plummet toward the bottom … and then reach over and hit the snooze button.