What can you gauge from Arizona’s big 62-24 win over Northern Arizona in its usual Pac-12 After Dark game?

That it’s good enough to beat Northern Arizona, and well, that Arizona has a long way to go to be a contender for anything. To its credit, Arizona beat who it had to on Sept. 2.

It beats the alternative.

But just about a minute into his postgame evaluation, Arizona coach Rich Rodriguez was his own worst critic. Sometimes he is; sometimes he’s not. 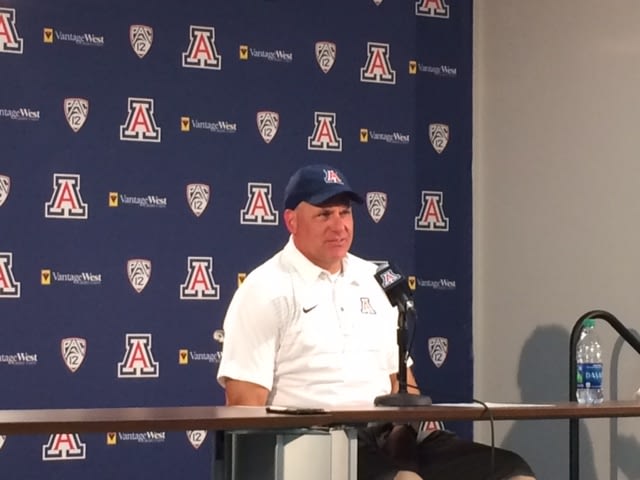 Rich Rod speaking to the media after UA’s 62-24 win over NAU.

“They got outplayed and outcoached in the first half,” Rodriguez said, just seconds into sitting down to address the media in talking about his team. “We struggled defensively the whole game.”

And there you have it – Arizona continues its defensive struggles. When a team gives up more than 560 yards in total offense, there are problems and glaring ones when it’s coming from a smaller, typically easier-to-beat team.

“We have a lot of teaching and learning to do,” Rodriguez said. “But I think our guys are conscientious enough to do that. We have a real good team coming in (Houston is the next opponent) so we have to get better in a hurry.”
One game and one week of practice typically doesn’t make that happen no matter how much you want it to happen.

Arizona will struggle throughout the season on the defensive side.

Bless UA defensive coordinator Marcel Yates right now. Arizona will suffer growing pains on the defensive side.
“I don’t think anyone of the defensive side played really well,” said Rodriguez, who mentioned a couple of times Arizona did not create one three-and-out all night.

As Demetrius Flannigan-Fowles put it, “we have some cleaning up to do. Games aren’t perfect. This was our first game so you have to be able to shake it off; come in and respond.”

At least he did his part by picking off NAU’s Case Cookus a couple of times, once at the 1-yard line to keep Arizona’s momentum.

On offense, well, that’s another story. Arizona is capable of scoring points and will plenty this season behind Brandon Dawkins, Nick Wilson, J.J. Taylor, Shun Brown, Tyrell Johnson & Co. Will it be enough to keep Arizona’s success above .500?

One can hope. But good luck with that.

The running game can possibly control portions of the game, but not everyone is NAU.

With its younger group of players – many freshmen – Arizona didn’t play the big play, deep play well and it lost containment one too many times, Rodriguez said.

“We certainly can play a lot better; I think our guys know that,” Rodriguez said.

After all, the offense won’t be able to bail out the defense every night. Let’s also put this in perspective: Arizona beat NAU 77-13 two years ago and finished 7-6. Had to throw that out there. Heck, 7-6 looks quite nice right now.

But, Arizona won’t be running for more than 500 yards all the time, even though it’s done it in back-to-back games going back to last season.

But it’s always good to have depth in the backfield (Arizona must hope it lasts) and a mobile quarterback in Dawkins, who gives Arizona another dimension in the running game.

“Brandon was one of those guys who took charge in the second half,” Rodriguez said.

As for the passing game? Rodriguez said “was there one?” but added he didn’t really have to go to it given the running game worked so well.

In the end, just a few minutes before midnight, Arizona was able to get off the field with a win. It beats the alternative.