We are now only 64 days until the Arizona Wildcats kick off their 2018 season under new coach Kevin Sumlin. 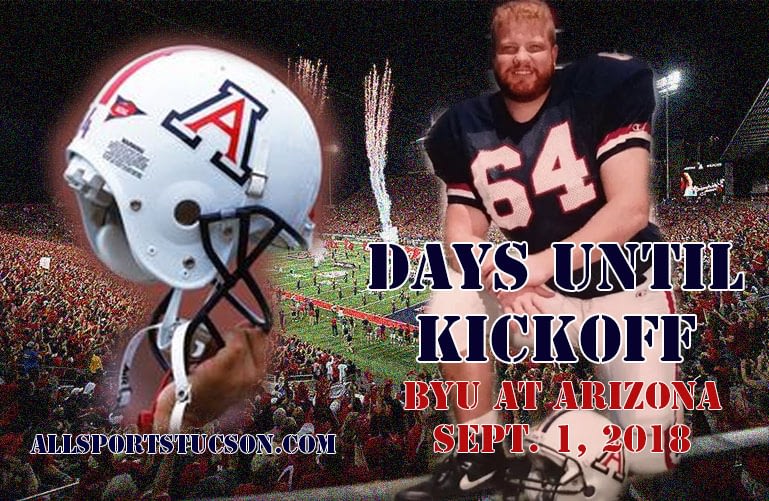 — With it being the 64th day until kickoff, the best player to wear No. 64 for Arizona? That would be the late Warner Smith, the offensive lineman standout and team captain who completed his career in 1994. Smith, native of San Manuel, Ariz., passed away in January after battling Lou Gehrig’s disease (ALS) since 2014. He is survived by his wife Becky and daughter Carlee.

Smith was a four-year starter and senior team captain for the Wildcats during the Desert Swarm era. After beginning his career on the defensive side of the ball, Smith became a two-time All-Pac-10 honoree as an offensive guard. During his career, Arizona compiled a 28-18-1 overall record, appeared in three bowl games and produced the 1994 Fiesta Bowl shutout over 10th-ranked Miami to cap the program’s first 10-win season.

Wearing No. 64 for the Wildcats this season is center Nathan Eldridge, a fourth-year junior who was voted honorable mention All-Pac-12 by the league’s coaches last year. He was named a second-team All-Pac-12 performer by the Associated Press. A preseason watch list candidate for the Rimington Trophy, Eldridge started all 12 games at center for the Pac-12’s top rushing offense, which ranked third nationally with 324.4 yards per game during the regular season. Arizona allowed fewest sacks of any Pac-12 team in regular season.

HeroSports.com has selected Eldridge as the best No. 64 in all of college football, citing a quote about Eldridge by former offensive line coach Jim Michalczik, who is now with Oregon State:

“You’re kind of like an artist. A great violinist, when the symphony is done, is going to go work on little things on their own. He’s kind of bought into that. It’s good to see the maturity to buy into that.”

64 DAYS until football returns!@ArizonaFBall center @NathanJ53 is the best No. 64 in the country