We have reached 26 days until the Arizona Wildcats kick off their 2018 campaign under new coach Kevin Sumlin. The season begins when Arizona hosts BYU on Sept. 1 at Arizona Stadium. 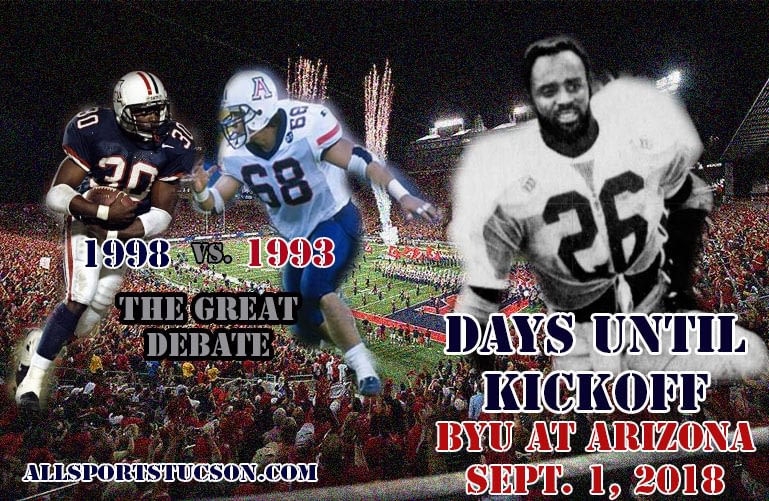 Earlier in the countdown, we presented 13 categories for readers to vote on breaking down the 1993 vs. 1998 competition:

The results are in … and the 1998 team is the clear choice as the better of the two among readers, topping the 1993 team in nine out of 13 categories:

The 1998’s Chris McAlister was a significant reason why his team topped the 1993’s defensive backs and return game. The 1998 defensive backs with McAlister starring at cornerback was the only defensive unit chosen over the 1993’s vaunted Desert Swarm. McAlister, along with Dennis Northcutt, gave the 1998 team a distinct advantage in the return game as well.

The 1998 offense also swept every position by significant margins, with the closest being the offensive line comparison. The 1998 team, led by Morris Trophy winner Yusuf Scott, still won that by a difference of 67.6 percent to 32.4 percent.

The readers have spoken, without a doubt, the 1998 is the greatest team in school history, especially when lined up position-by-position, category-by-category against the 1993 team.

Still not believing? That’s the beauty of sports with teams from different time frames. You can always argue about it over a beer.

— The best Wildcat to wear No. 26 was the late great Dave Liggins, a safety who transferred to Arizona from Cincinnati during the Tony Mason era and played with the Wildcats from 1978 to 1980. Liggins earned Defensive Player of the Game honors in the 1979 Fiesta Bowl loss against Pittsburgh. Liggins intercepted future Hall of Fame quarterback Dan Marino twice in that game. Liggins passed away in 2016 from liver problems. At one point, he required a liver transplant.

The number is shared by two players — fourth-year junior punter/receiver Matt Aragon (a former Cienega High School standout) and sophomore linebacker Anthony Pandy. Aragon punted in one game, against Washington State, in 2016 as a redshirt freshman and averaged 38.7 yards a punt. He worked with the receivers last season but did not see action. Pandy played in 11 games last year as a true freshman and he tallied nine tackles, including an impressive 2.5 for loss, one of them a sack.