We have reached only 16 days until the Arizona Wildcats kick off their 2018 campaign under new coach Kevin Sumlin. The season begins when Arizona hosts BYU on Sept. 1 at Arizona Stadium. 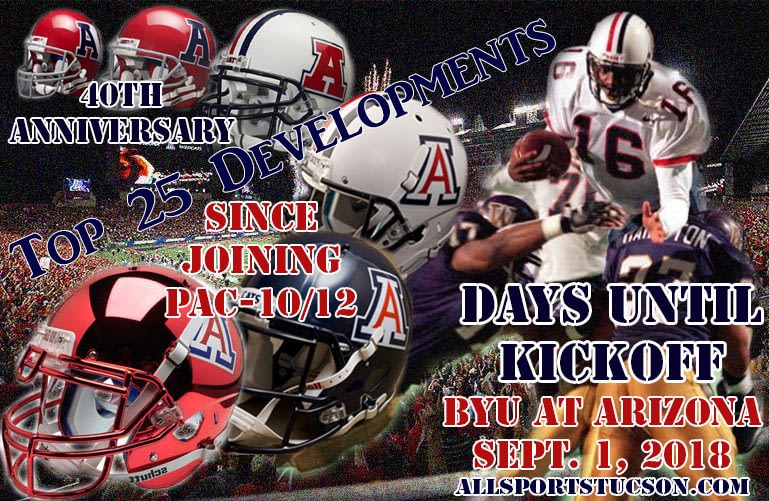 One of the greatest plays and games in the history of Arizona football could have been altered if Max Zendejas did not change his mind and remained on the team bus after hastily going there at halftime.

This ties into the 1993 vs. 1998 Great Debate — the best to wear No. 16 in Arizona history? Ortege Jenkins in 1998? Dan White in 1993? Tough call with White going 3-0 vs. ASU in his career and being the impeccable offensive leader of the 1993 team that went 10-2. But the best in my opinion is Ortege Jenkins, the master behind the “Leap by the Lake” play that is legendary in Arizona history. Jenkins was also a gifted playmaker at quarterback who split his time with Keith Smith. We are not sure what could have happened if he was given full reign of the offense, but what he did for the most part was solid.

Scenario of the Leap by the Lake … Arizona had the ball at the Washington 9, down 28-24, with 12 seconds left. Arizona coach Dick Tomey was out of timeouts. Jenkins ran out of options and scrambled up the middle and went airborne at about the 3 when confronted with a trio of Huskies. The defenders hit Jenkins low, sending him head over heels, nearly landing on his feet in the end zone. Tomey mentioned it was the most unbelievable ending he has ever seen.

Two players wear the number now, including the brother of one of Arizona’s most prized quarterback recruits. Freshman walk-on receiver William Gunnell is the older brother of four-star quarterback Grant Gunnell, a senior at St. Pius X High School in Houston. William Gunnell followed Sumlin from Texas A&M. The storyline down the road is one brother throwing a pass to another brother in a college game.

The other No. 16 is fifth-year senior punter Jake Glatting, who has 41 punts in his career for an average of 36.8 yards.