The Badgers (3-4 overall, 3-1 in the 6A Metro) return home Friday night to face Sandra Day O’Connor in a non-region game.

— QB/S Jovoni Borbon completed 12 of 23 passes for 193 yards with two TDs and rushed for 68 yards on 15 carries. On defense, he had six tackles, including one for loss.

— WR Keyon Taylor had three receptions for 100 yards and a TD.

— LB/TE Jesse Avina had six tackles including one for loss. He also had a 13-yard TD reception.

— LB Damian Brown had seven tackles including one for loss. 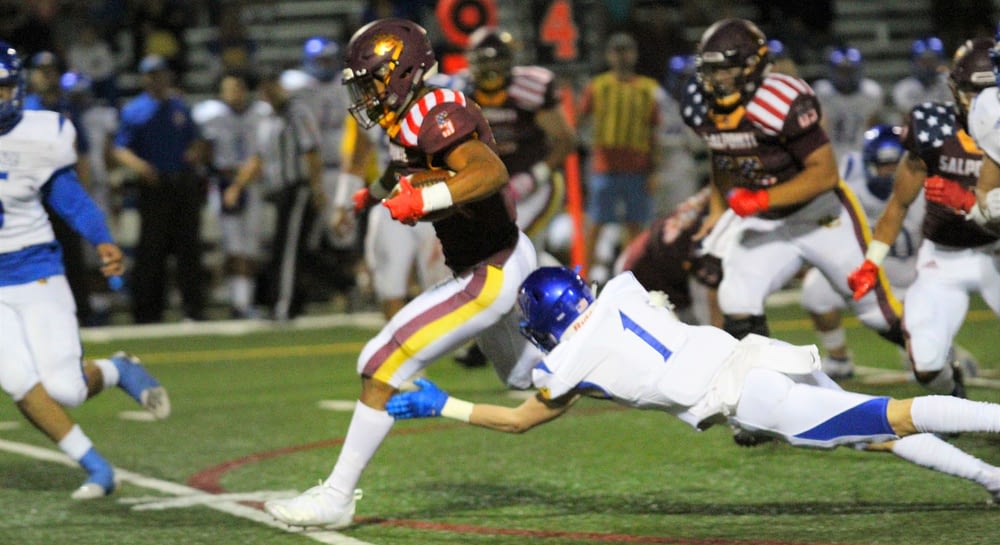 — WR Cameron Drescher had two catches for 77 yards and a TD.

Proud of our players. We did not play pretty, but we played hard. Hats off to Flowing Wells for a hard fought game @FWCabsSports #weareallrangers

Mountain View has won consecutive games in the 5A Southern to start with a 2-0 record, tied with Desert View. The Mountain Lions look to extend the winning streak to three games this week in what should be a competitive game with Rincon/University.

— QB Jackson Bolin completed 6 of 8 passes for 74 yards with two TDs and no interceptions. He has completed 78.3 percent of his passes (36 of 46) for 721 yards with 12 TDs and only one interception this season.

— Only three players in the history of high school football in Arizona have ever rushed for more than 6,000 yards in a career and Robinson is one of them with 6,274 and counting. Brandon Long, of 3A River Valley, finished his career with 6,750 yards and Casey Jahn, of 2A Northwest Christian, leads everyone with 7,486. It’s an exclusive group. Robinson is only 1,213 yards away from owning it all and, with three regular season games and at least one playoff game remaining, he has a chance. Robinson scored six TDs, finishing the night with 92 in his career. Jahn finished with 110

— LB Luke Regina had 2.5 sacks among his seven tackles.

— QB Montana Neustadter completed 9 of 14 passes for 92 yards and a touchdown without an interception. He also rushed for 56 yards on 13 carries with a TD.

–S Ethan Seppala had his fourth interception of the season.

Pueblo hosts Walden Grove on Friday night in an important 4A Gila showdown. Both are 2-0 in the region. The winner will have the inside path to the region title and automatic bid to the state playoffs with only two games remaining after this week.

— QB Will Parker completed 12 of 19 passes for 235 yards with four TDs and no interceptions. He also rushed for 77 yards on four carries, including a 64-yard score.

— LB Garrick Krautz had nine tackles, including a sack.

— QB Kevin Silva completed 8 of 9 passes for 172 yards with two TDs and no interceptions.

— DE Julian Cmpos had two sacks among his five tackles.

— DT Jonathan Cardenas, a sophomore, had three tackles, all for lost yardage.

— RB Danny McAllister carried the ball four times for 62 yards and a TD.

— WR Dawson Szarek had four catches for 93 yards and a TD.

— RB/LB Antone Brack had two catches (both for TDs) for 70 yards and he led the team with 11 tackles.

Catalina plays at Sahuarita Friday with both teams in search of their first 3A South win after starting 0-2.

— QB/LB Anton Jose completed 6 of 8 passes for 117 yards with two TDs. He also rushed for 358 yards on 36 carries with five TDs. On defense, he tallied 10 tackles and had an interception.

— RB/LB Jesus Buendia, a freshman, rushed for 97 yards on 15 carries. He also led the team with 13 tackles.

— WR Seth Castro, another freshman, had five receptions for 108 yards with two TDs.

— QB Logan Davis, a junior, completed 17 of 29 passes for 249 yards with three TDs and one interception.

— RB Talon Haynie, a sophomore, rushed 11 times for 79 yards and a touchdown.

— TE/DE Kason Jacquez tallied nine catches for 139 yards and a TD. He also had 16 tackles, two for loss.

— LB Brayden Merrill, a sophomore, had 23 tackles, three for loss.