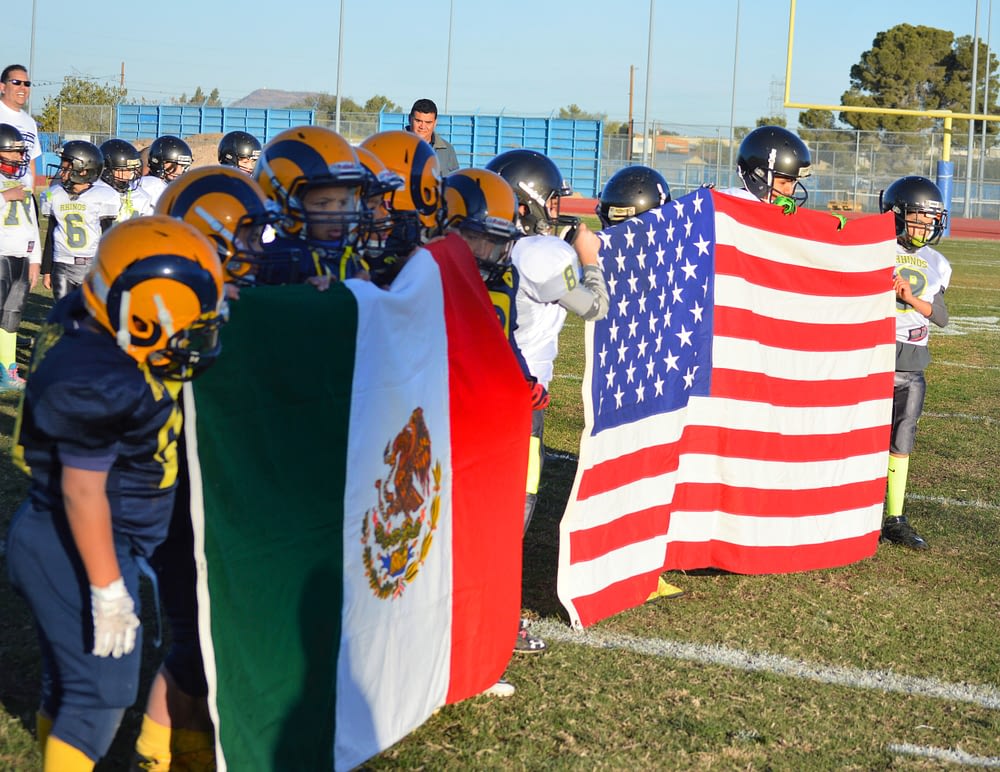 The Southwest Rams organization of the Tucson Youth Football and Spirit Federation (TYFSF) hosted the First International Bowl Saturday morning at Sunnyside High School. The 9U and 12U Rams teams went up against the Rhinos of Hermosillo, Sonora.

The scores were a bit lopsided, as one would expect, but the main focus of the event was outreach and friendship through youth football. TYFSF visited Hermosillo before the season started and helped outfit the organization with items such as helmets and pads.

Sunnyside High standout Nathen Drow was awarded the TYF Humanitarian Award for his efforts in collecting clothing and shoes for children in Hermosillo. In all, the sophomore collected over 180 items including 40 pairs of tennis shoes and clothing enough for over 50 kids.

Local TYFSF president Julius Holt will be rounding up several of his former University of Arizona teammates in the spring to offer more camps and instruction to the Hermosillo league.

In the 9U game, Xavier Grajeda Cruz threw for 49 yards including a 44-yard touchdown pass to Raul Soto IV. Jeremiah Edwards picked up a 1-yard scoring run, Shamar Berryhill had a 10-yard TD and Makoa Pina ran one in from 11 out.

Cruz also scored on the ground on a 53-yard dash. Julian Moncivaiz had a 36-yard scoring run. Taysean Romero came up with a 60-yard kickoff return for another score and Berryhill had an interception. Kicker Aaron Abarca made six extra points, which count as two points at this level.

Hermosillo was led by Athen Gutierrez. Gutierrez put in almost 200 yards in kickoff return duties including back-to-back 75-yard returns for touchdowns. Iker Fernando Armenta stole the show with a 64-yard scoring run down the Rhino sideline.

In the 12U game, the Rams came out throwing and Alfredo Sotelo connected on 161 yards total with three TDS. Diego Banos had a 15-yard TD reception, Davian Carrasco had a 22-yard TD grab, Alejandro Montano had a 3-yard score. Evan Ramirez had three catches for 100 yards.

Sean Sierra had an 8-yard rushing TD, Nycholas McDaniel had a 62-yard scoring run and Banos added an 88-yard scoring run. McDaniel scored another TD on 50-yard fumble return. Montano had an interception.

Edgar Aguirre had an interception for Hermosillo and Alejandro Ramirez had a 55-yard scoring run. QB Juan Badillo rushed for 11 yards.

Edgar Aguirre (85) came up with an interception for the Rhinos of Hermosillo. (Andy Morales/AllSportsTucson.com)

QB OF THE YEAR