We are in Game Week — five days — until the tailgate season is upon us when the Arizona Wildcats kick off their 2018 campaign under new coach Kevin Sumlin. The season begins when Arizona hosts BYU on Saturday at Arizona Stadium. 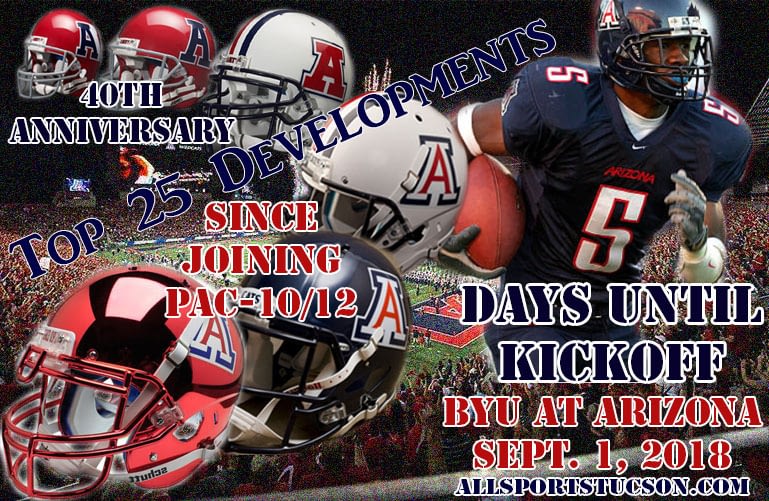 Dick Tomey was forced to resign after 14 years at Arizona following the 2000 season. Looking back, it was a bad move that backfired, especially with unsuccessful John Mackovic replacing him. Tomey led Arizona to its two best seasons and left as the coach with the most career wins (95-64-4). He is one of only four coaches to win 12 games in 85 years of Pac-10 when the 1998 team finished 12-1 and ranked No. 4 in the nation. He was the Pac-10 Coach of the Year in 1992, the year the Desert Swarm defense was born. He coached 20 All-Americans and 43 first-team All-Pac-10 players. He also coached players to eight major national player awards and had four Morris Trophy winners. He should be destined for the College Football Hall of Fame.

The best to wear No. 5 in Arizona history? That honor goes to 2007 Jim Thorpe Award winner Antoine Cason at cornerback. He was also a consensus All-American as a senior in 2007. Among his highlight-reel plays in 2007 were interception returns of 42 yards for a score against Oregon, a 56-yard punt return for a score against the Ducks and a 60-yard interception return for a score against Oregon State. He had three other interceptions on the year to give
him a career total of 15, fourth best in school history. His 165 yard on INT returns was just shy of the school record 191 yards set by Thorpe Award winner Darryll Lewis in 1990.
Cason was a two-time first-team All-Pac-10 selection.

Casteel played in 11 games as a true-freshman backup receiver and occasional special teams contributor. He caught his first career pass – a 24-yard pass – against Purdue in Foster Farms Bowl. Young graduated this year from Foster High School in Richmond, Texas. He was voted team captain and MVP as a senior. He totaled 152 tackles, eight interceptions, 18 pass breakups, four tackles for loss and three forced fumbles in his career.