The Big Kat was back at it with her big bat again at Hillenbrand.

With apologies to Dr. Seuss and Johnny Mize and Andres Gallarraga who were nicknamed the Big Cat, Arizona’s Katiyana Mauga was in sync on Saturday.

For Mauga, the Big Kat was powerful for the big-bat Cats, so the name is appropriate and has been all season … no more fitting that on Saturday afternoon. 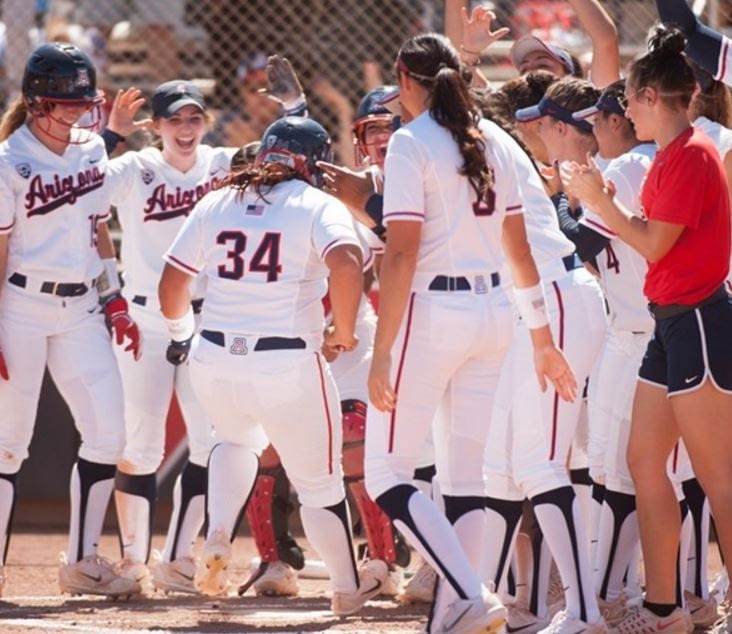 Once again, Mauga was smashing again, hitting her 24th homer of the season in the third inning to get Arizona’s party started, one that ended with a 5-0 victory over South Carolina. She added a single to finish with three RBI.

The blast moved Mauga into the top spot of home run leaders in the Pac-12 for a career and just four behind Oklahoma’s Lauren Chamberlain for the NCAA record. She now has 91. It was her second home run in back-to-back games since April 22.

What a luxury it is to have someone like Mauga, err, Big Kat, who can put a run on the board with any swing. Or so it would seem.

Mauga was not made available to the meda after the game.

“It’s not just Kati who can do that,” said Mike Candrea. “We have quite a few kids in this group that can do that. But when Kati is hot and she’s seeing the ball well and hitting the ball where it’s pitched, she’s a weapon. And obviously any swing she takes she can have it leave the ballpark.”

Still, what Candrea said he likes – as was the case on Saturday – is UA is scoring runs and not having to rely primarily on the home run. From top to bottom everyone is contributing. Candrea specifically singled out the bottom of the order, saying they had a big impact on Saturday’s outcome.

Still, the long ball has been very, very good to the Cats. It went into the NCAAs with a NCAA-leading 88 dingers. It’s now over 90 for the season. Going in, it had hit more home runs (88) than its opponents had in total runs (85).

Mauga has more than 25 percent of those. She’s said to be “nonchalant” about it and when records are announced the players are reminded they say, “No way,” said Mandie Perez.

What has been more impressive is not her long-ball antics but her overall presence at the plate. Candrea said she’s become a better, more patient hitter. She’s found a better stance and has become more comfortable at the plate.

That said, Mauga reminds me of a similar hitter Candrea had in the Olympic Games in 2004 with Crystal Bustos, a hard-hitting bomber who crushed the ball. Are there any similarities?

They possess “fast gears and your born with that, great hand speed,” Candrea said. “She’s able to connect her upper body with her lower body more often than not. And that creates a lot of bat speed. And the ball goes a long way.

RELATED: The need for off-speed: Arizona hoping to ride O’Toole’s change-up in postseason